You are here: Home / Politics / Prince William and Kate Middleton arrive in Singapore

Prince William and Kate Middleton, the Duke and Duchess of Cambridge arrived in Singapore on their nine day Asia-Pacific tour to celebrate the Diamond Jubilee of Queen Elizabeth II. The couple started off their journey by visiting the Botanical Garden of Singapore. They are going to be the center of attraction on most of their overseas tour. Prince William and Kate Middleton were given a warm and modest welcome at the Singapore airport. Anthony Phillipson, the British High Commissioner of Singapore addressed the couple as the global superstars. 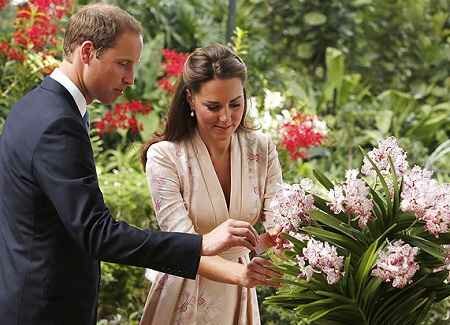 Prince William and Kate Middleton got married in the year 2011 and since then the couple were leading a busy life. The couple visited the city’s Botanic Garden to view the orchids. Among the orchids, one was named in honor of this royal couple and the other was named after the Princess Diana, who was the late mother of Prince William. The thirty-year-old Kate wore an orchid patterned pink kimono-style dress which was designed by Jenny Packham and William wore a dark blue suit along with a light blue tie.

According to the director of the Singapore Botanic Gardens, Nigel Taylor, the orchid selected for the couple was one of the most beautiful orchids out there in the garden as they wanted to give something unique for the special couple. The Senior Parliamentary Secretary of Defence – Dr Maliki Osman and his wife greeted the couple at the airport. The couple were taken to one of the Singapore‘s well known Hotel, the colonial-era Raffles where more than hundreds of people had lined up to take their pictures. Both of them are expected to stay at the hotel for three nights.

According to the report, William and Kate will head to Malaysia where the couple will visit the Borneo’s Sabah state and the capital city Kuala Lumpur from September 13 -15. It is expected that Kate will give her first speech to the staff and patients of a hospital in Malaysia. Later, the duo will fly to the Solomon Island which is a poor former British territory in the north east of Australia and stay there from September 16-18. They are also expected to take part in the sporting activities and wear the traditional dress while visiting Tuvalu.