On Monday evening, US President, Barack Hussein Obama delivered historic speech in the Indian Parliament (Lok Sabha and Rajya Sabha). This speech contains more than 4,300 words. About 5:30 p.m., the US president reached the Parliament where he was received by Rajya Sabha Chairman Hamid Ansari and Lok Sabha Speaker Meira Kumar. At the entrance of the Central Hall of Parliament, Prime Minister Manmohan Singh and Parliamentary Affairs Minister Pawan Kumar Bansal were also waiting for Obama. 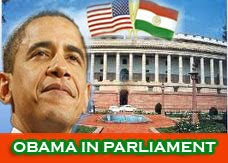 In his Indian Parliament speech, US President Barack Obama expressed his thoughts about the improvement of the two nations through mutual sharing of ideas on democratic platform. The BJP and other political parties applauded Barack Obama’s speech however the remaining parties did not seem to be amused, stating that Obama had not presented anything touchable. The Left also advised the Government not to yield to US pressure on strategic and economic matters.

US president Barrack Obama also discussed about matters which ranges from bilateral relationships to terrorism, economic pacts to atomic energy, India’s emergence as an economic power to regional security. Besides this, he also valued the success of Right to Information Act (RTI) which has enabled giving the shape to the voices of people democratically. The BJP veteran LK Advani said, “In today’s speech, he (Obama) has met with the expectations of the Indian people,” by appreciating Barack Obama’s Parliament speech. Obama also gives reference to Mahatma Gandhi, Vivekananda, B R Ambedkar and Ravindra Nath Tagore in his speech.

At last, after US President Barrack Obama’s speech, Lok Sabha speaker delivered the vote of thanks and commended Obama for his enlightening speech. She also thanked him for his concerned about terrorism.

“Mr. Vice President, Madame Speaker, Mr. Prime Minister, Members of the Lok Sabha and Rajya Sabha, and most of all, the people of India.

I thank you for the great honor of addressing the representatives of more than one billion Indians and the world’s largest democracy. I bring the greetings and friendship of the world’s oldest democracy the U.S.A, including nearly three million proud and patriotic Indian Americans.

Over the past three days, my wife Michelle and I have experienced the beauty and dynamism of India and its people. From the majesty of Humayun’s Tomb to the advanced technologies that are empowering farmers and women who are the backbone of Indian society. From a Diwali celebration with schoolchildren to the innovators who are fueling India’s economic rise. From the university students who will chart India’s future, to you leaders who helped to bring India to this moment of promise.

At every stop, we have been welcomed with the hospitality for which Indians have always been known. So to you and the people of India, on behalf of me, Michelle and the American people, please accept our deepest thanks. Bahoot dhanyavad.

I am not the first American president to visit India. Nor will I be the last. But I am proud to visit India so early in my presidency. It is no coincidence that India is my first stop on a visit to Asia, or that this has been my longest visit to another country since becoming President.

For in Asia and around the world, India is not simply emerging; India has already emerged. And it is my firm belief that the relationship between the United States and India bound by our shared interests and values will be one of the defining partnerships of the 21st century. This is the partnership I have come here to build. This is the vision that our nations can realize together.

My confidence in our shared future is grounded in my respect for India’s treasured past a civilization that has been shaping the world for thousands of years. Indians unlocked the intricacies of the human body and the vastness of our universe. And it is no exaggeration to say that our information age is rooted in Indian innovations including the number zero.
India not only opened our minds, she expanded our moral imagination. With religious texts that still summon the faithful to lives of dignity and discipline. With poets who imagined a future “where the mind is without fear and the head is held high.” And with a man whose message of love and justice endures the Father of your Nation, Mahatma Gandhi.

For me and Michelle, this visit has therefore held special meaning. Throughout my life, including my work as a young man on behalf of the urban poor, I have always found inspiration in the life of Gandhiji and in his simple and profound lesson to be the change we seek in the world. And just as he summoned Indians to seek their destiny, he influenced champions of equality in my own country, including a young Martin Luther King. After making his pilgrimage to India a half century ago, Dr. King called Gandhi’s philosophy of non-violent resistance “the only logical and moral approach” in the struggle for justice and progress.

So we were honored to visit the residence where Gandhi and King both stayed Mani Bhavan. We were humbled to pay our respects at Raj Ghat. And I am mindful that I might not be standing before you today, as President of the United States, had it not been for Gandhi and the message he shared with America and the world.

An ancient civilization of science and innovation. A fundamental faith in human progress. This is the sturdy foundation upon which you have built ever since that stroke of midnight when the tricolor was raised over a free and independent India. And despite the skeptics who said that this country was simply too poor, too vast, too diverse to succeed, you surmounted overwhelming odds and became a model to the world.

Instead of slipping into starvation, you launched a Green Revolution that fed millions. Instead of becoming dependent on commodities and exports, you invested in science and technology and in your greatest resource the Indian people. And the world sees the results, from the supercomputers you build to the Indian flag that you put on the moon.

Video of Obama’s speech to Parliament Live in India from YouTube: