On Sunday night, Prime Minister of Singapore Lee Hsien Loong declared a ‘National Service Recognition Award‘ at the National Day Rally 2010. According to his announcement, National Servicemen will get award of $9,000 in a move to show that citizens come first amidst resentment towards foreigners. 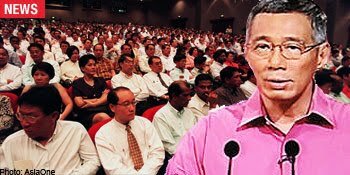 The award of $9,000 will be credited into the Post Secondary Education and CPF accounts which can be used to pay for an education and housing of NSman. At any one time, there are 55,000 active servicemen – about 20,000 regulars and over 30,000 full-time national servicemen. There are about 300,000 operationally-ready National Servicemen. MP for Pasir Ris-Punggol GRC, Mr. Michael Palmer, said: “You can use it towards housing; you can use it towards education. That’s going to come in useful because that will benefit their children, their families as well.”

Apart from defending jobs, Prime Minister Lee also provides an additional 22,000 new flats next year – 6,000 more than this year. According to Prime Minister Lee, at present, NSman will be allowed to participate in HDB’s Design, Build and Sell Scheme (DBSS) for households earning between S$8,000 and S$10,000 monthly by the government. Mr. Lee said the move will widen the choice beyond executive condos, to allow them to buy HDB DBSS flats with an S$30,000 grant, but no HDB loan. He added that the government will also do more to cool the private property market. Lee Hsien Loong also commended Singaporeans for their Singapore Spirit in hosting the Youth Olympic Games (YOG).

In National Day Rally 2010, Singapore Prime Minister Lee Hsien Loong discussed about two issues, Immigration and education. Mr. Lee in his two-hour speech assured Singaporeans that they try to concerns over the rising number of foreigners in Singapore. He “empathized with” and understood Singaporeans’ worries about rivalry for jobs and houses, the crowding on public transport, and the “character of our society“.

7 more schools will offer Integrated Programmes for those confident of making it to university, while two more specialised schools will be set up for those less academically inclined.

The government will commit close to $4 billion over 20 years to build university endowment funds.

$700 million dollars will go into expanding and upgrading the 5 polytechnics, with a “through-train” programme introduced for some students to go straight to poly.

A new Population and Talent Division will be set up within the Prime Minister’s Office, with a Permanent Secretary and overseen by Deputy Prime Minister Wong Kang Seng.

$400 million will be given under the Workfare Income Supplement (WIS) to 400,000 lower-income Singaporeans

Each national serviceman will receive $9,000, with more for commanders, with the introduction of the National Service Recognition Award. The money, which will be paid in into servicemen’s CPF accounts to help with the cost of their housing and education needs, will go only to citizens.

$60 billion will be used to develop and double transport rail network over the next decade. This will include the new Downtown Line, Thomson Line and Eastern Region Line