You are here: Home / Politics / Nathan Deal and his wife Sandra are positive for runoff

Nathan Deal and his wife Sandra are positive for runoff 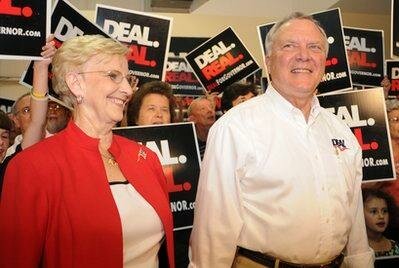 Nathan Deal and his wife Sandra Deal wait for election results as Deal seems poised for the Republican run-off at Deal’s campaign headquarters in Gainesville, Ga. on Tuesday, July 20, 2010. Deal is hoping for a strong showing in his former congressional district.

Nathan Deal certainly wins the vote for most unique election night headquarters, a hangar at the Gainesville Airport. Whether on not there is a celebration depends on voter turnout, especially here in Deal’s home base, District 9 which he served in Congress for the past 18 years.

However, standing before dozens of supporters in a Gainesville airport hangar, Deal told the sign waving crowd the battle for Republican voters has just begun.

“60 percent of the votes that were cast were by conservatives for conservative candidates and I will be the candidate in the runoff who is the conservative who will carry that banner,” said Deal.

Handel and Deal were among seven Republicans vying for their party’s nomination. A runoff to be held Aug. 10 is needed because no candidate got 50 percent plus one vote. The runoff winner will face Democrat and ex-Gov. Roy Barnes in November.