First time, the major political protests have been appeared in the Libya for ending the 41-year rule of Muammar Gaddafi. These anti-regime protests reached to Tripoli, a capital of Libya. However, the son of Muammar Gaddafi, Saif al-Islam issued warning to protesters on early Monday on national TV channel that the region will face a bloody civil war if protesters say no for reform offers and they would fight until “last man standing.” 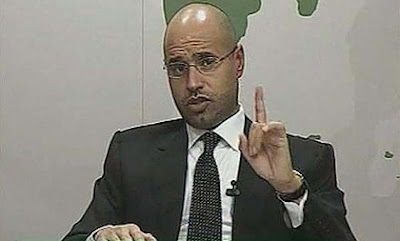 In Libya, the repression creates most brutal form and about 223 people were killed in 5 days of violence, as per US-based group Human Rights Watch. The people of the capital have also joined the protests. The protesters took out rally in streets of capital Tripoli that was begun from Benghazi where many government buildings were reported to be fired. In the rally, leaders of tribal have protested against Gaddafi and several army elements defected to opponent. They also said that they had taken control over two other cities of Libya.

As per one of the news sources, BBC Arabic stated that since the unrest set up, automatic gunfire and teargas caused in the capital for the first time.

Libyan leader Moammar Gaddafi’s son supports to his father. Therefore he warned to the people by means of national television and to protect 41-year-old command of his father over Libya, he expressed, “We will take up arms… we will fight to the last bullet. We will destroy seditious elements. If everybody is armed, it is civil war; we will kill each other… Libya is not Egypt, it is not Tunisia.” He also said that their spirits are very high and the leader Muammar Gaddafi is leading the battle in Tripoli, and they are behind him just as the Libyan army.

He said, “Libya is at a crossroads. If we do not agree today on reforms, we will not be mourning 84 people, but thousands of deaths, and rivers of blood will run through Libya.”

Production of one of the country’s oil fields has been reportedly stopped by a strike of worker and some European oil companies took out emigrant workers as well as suspended some operations.

As fast-moving development, the justice minister of Libya, Mustapha Abdeljalil gave up the job in protest to “the excessive use of force.” A senior diplomat of Libya in China, Hessein Sadiq al Musrati has also left the job and requested to all diplomatic staff for resigning.

The President of Libya, Gaddafi issued a statement on TV on Tuesday morning to refuse reports of fleeing the Libya. In a 22-second statement, Gaddafi appeared with holding an umbrella and leaning out of a van near his house. Gaddafi cleared, “I want to clarify that I am in Tripoli, and not in Venezuela.”

Libya’s anti-regime protests are inspiration of the successful uprisings of Tunisia and Egypt. In fact, Tunisia defeated the 23-year rule of president Zine al-Abidine Ben Ali on January 14 after around one month mass unrest. After just a few days on January 25, protests began in Egypt with tens of thousands of demonstrators to seek their President Hosni Mubarak’s ouster. In other countries, the unrest has also taken place including Iran, Yemen, Jordan, Bahrain and Algeria.

David Cameron, a Prime Minister of British visited the region and he said that the current Libya’s actions are terrible and undesirable. A Reuters reporter said that on Monday morning, the Tripoli based building of General People’s Congress or parliament was burning.