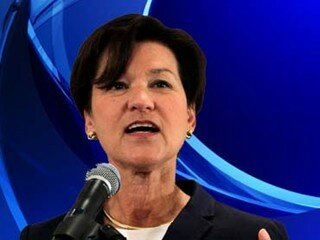 Alex Sink beat 67 year old Brian Moore, by 76.8 percent to 23.2 percent. In November’s general election, Alex Sink will face the winner of the Republican primary between Rick Scott and Attorney General Bill McCollum. The 61-year-old, State’s chief financial officer Sink is the former president of Bank of America’s Florida operations and  She is the wife of Bill McBride, who was the unsuccessful Democratic nominee for Governor of Florida in 2002.

In 2006, sink was the Democratic candidate for Florida’s office of Chief Financial Officer. She was also the first Democrat voted to the state Cabinet since 1998.

In  this election Florida’s Republican voters have voted wealthy newcomer Rick Scott over career public servant Bill McCollum as their candidate for governor. According to the Tuesday night election result, Scott had 46 percent of the vote and McCollum 43 percent with 92 percent of precincts. Scott will face Democrat Alex Sink in the Nov. 2 general election.

According to press release, Rep. Kendrick Meek has defeated Jeff Greene in the Democratic State Primary. With 39 percent of precincts reporting, Mr. Meek received 55 percent of the vote. Now he will have to go against Marco Rubio and Charlie Crist on upcoming general elections.