Singapore’s Senior Minister of State for Foreign Affairs, 55 year old Dr. Balaji Sadasivan died early on Monday who was suffering from colon cancer. Currently, he was also Chairman of the Executive Board of the World Health Organization. Dr. Ma Swan Hoo, Balaji’s wife grieves over her husband’s death. Funeral occasion of Dr Balaji Sadasivan will be scheduled on Thursday at Mandai Crematorium. 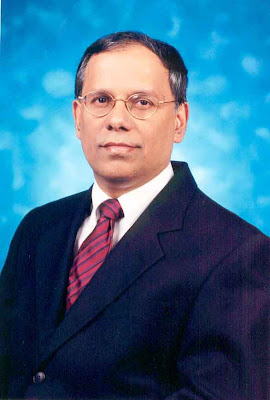 Dr Balaji Sadasivan completed his graduation from National University of Singapore (NUS). Then in1979, he continued his education at the Royal College of Physicians and Surgeons of Glasgow in Scotland, becoming a Fellow in 1984. He got training at the Henry Ford Hospital in Detroit, Michigan from 1985 to 1989. After that he worked as a neurosurgeon till 2001 and published over 50 book chapters and journal articles.

In the year 2001, he joined politics as a candidate for the People’s Action Party, contesting in Ang Mo Kio GRC. He was appointed as minister of state for health and environment in November 2001. This year, he was appointed as senior minister of state for foreign affairs and information, communications and the arts from May 2006 to March. In April, his responsibility was cramped to the ministry of foreign affairs.

During nine years career of public service, he contributed many ministries, including those for the Environment, Health, Transport, and Foreign Affairs.

Before few years, Dr Balaji was on treatment for colon cancer at Gleneagles Hospital where he had surgery in September 23rd, 2008 to remove a cancerous tumour in the colon. Even though diagnosis and many visits to the hospital for treatment, Dr Balaji was very active in his various roles, recalled his parliamentary colleagues yesterday. He left behind his wife, Dr Ma Swan Hoo whom he met in medical school, and two adult children Anita and Dharma.

The wake is at Cheng San Community Club, in the ward that Dr Balaji was taking care of as an Ang Mo Kio Group Representation Constituency (GRC) MP. The funeral is scheduled for Thursday afternoon at Mandai Crematorium.

A fellow MP in the GRC, Mr Inderjit Singh said that Dr Balaji continued with his grassroots activities including the weekly meet-the-people sessions, until July. Mr Singh said, “His topmost priority was to serve the residents.”

In his sympathy letter to Dr Balaji’s wife, Prime Minister Lee Hsien Loong described him as a “thoughtful and articulate” person, who has a “broad interest in Singapore and the world“.

Mr Lee wrote, “He was friendly, patient and approachable, and could speak several languages, including Mandarin and various Chinese dialects. His sincerity won him the trust, respect and support of his grassroots leaders and residents. He was dedicated community leader, a distinguished public servant and a humble and dependable colleague and friend”.

“His untimely passing is a sad loss to all of us,” he said.

Deputy Prime Minister and Minister for Home Affairs, Mr. Wong Kan Seng was at the wake. He said, “I met Dr Balaji two weeks ago at my office, where I held briefings for ministers of state. He felt very weak but he turned up.”

Mr Zainudin Nordin, Mayor of Central Singapore District also presented during the funeral. He said that Dr Balaji “had lost a lot of weight when I saw him at the parliamentary sitting two weeks ago“.

Many of his colleagues and friends expressed him as a “dedicated and unassuming” man, and lamented his passing as a “great loss to Singapore“.

George Yeo, a Foreign Minister ruined the news of Dr Balaji’s death in a Twitter message just before 10.30 am on Monday. He twitted, ‘Mourns the passing away of dear friend and colleague Dr Balaji Sadasivan.’

At Cheng San CC, members of the public can present their condolences today and tomorrow, from 11am to midnight and the funeral will be at 3.45pm at Mandai Crematorium.