The official website of Wirefly’s Mobile Makeover Anniversary Contest is wireflycontest.com/makeover. Enter for a chance to win!

Eligibility: Open to legal U.S. residents, age 18 or older, with a valid email address and a valid street address in any U.S. territory, state or the District of Columbia, EXCLUDING New York, Florida, Tennessee, and Puerto Rico. P.O. boxes or APO. 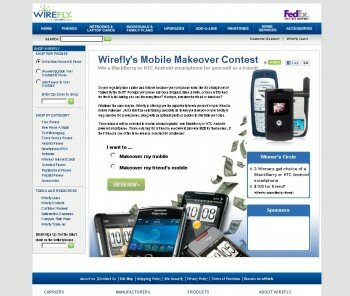 About company: Wirefly is the Internet’s leading seller of cell phones and wireless plans, offering more carriers, plans and phones than any other online cell phone store. Take advantage of our online-only prices for the best deals on cell phones from Verizon Wireless, AT&T, T-Mobile, Sprint, and Nextel. Wirefly offers unmatched resources to help individuals and families find the best phones, the best service and the best plans — and our cell phones are backed by a satisfaction guarantee.

Prize: three potential winners
The prize for each winning entry is an HTC or Blackberry smart phone offered on Wirefly.com with an estimated value of between $300- $500 and, if a winning entry is submitted on behalf of someone else, the person who submits the entry may win a referral prize of a $100 American Express gift card, subject to American Express’s gift card terms and conditions.

Winner: The selected winners may be posted on the Wirefly Contest website at www.contest.wirefly.com or such other site(s) as determined by Simplexity and is available by contacting Simplexity at [email protected] from November 1, 2010 through November 1, 2011.