The cat’s owner, Darryl Mann grabbed her pet, Lola, by the scruff of its neck and dropped it in a large can, and walks away down the street before closing the lid, that all was captured on camera supposedly. 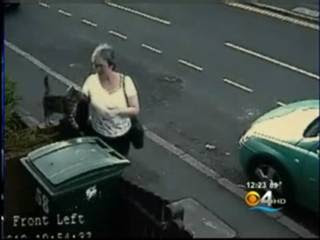 Before Lola was rescued, she spent 15 hours inside the garbage bin. The cat’s owner, Darryl Mann, freed Lola when he heard her cries. Owners Stephanie and Darryl Mann discovered their trapped cat when they heard her cries and decided to check the footage from their security camera to see how Lola ended up in the trash bin. They have appealed to the West Midlands Police, who have turned the case over to the RSPCA. They believed Lola must have been dumped by some drunks but when they saw the video, they were shocked to discover it was the work of a middle-aged woman.

Mann said, “I don’t know how someone could do it to such a defenseless animal”, “I thought she might have got in herself – she’s not the brightest cat. It’s disgusting, she’s a lovely cat… she’d never hurt anyone.” The woman, a 45-year-old bank worker named Mary, told reporters that she “thought it would be funny.” A crowd gathered at her house after her name and address were posted online, according to the AP.

Coventry police stationed wardens outside the house after death threats were received. She was dubbed the “Purrminator” by The Sun newspaper. Mann said Lola is doing fine and is “very tired with all the attention and fuss she keeps getting.” Police have investigated the incident and determined the woman did not commit a criminal offense.

Investigators at the Royal Society for the Prevention of Cruelty to Animals, which prosecutes cruelty cases, said Tuesday that the gray striped cat was trapped for 15 hours before being rescued on Sunday morning by her owners, who told a British newspaper they heard Lola’s muffled cries from inside the bin. The distressed cat was unharmed. To identify the woman, an additional footage was posted to Youtube and Facebook.