The official webpage of Mike’s Big Game Texas Sweepstakes is winmikes.com. Enter for a chance to win 1 of 2 trips to Arlington, Texas including two tickets to the Big Game! Entrants must be 21 years old or older at the time of entry.  Open to legal residents of the state of TX. Sweepstakes begins on September 15, 2010 and ends on December 15, 2010. 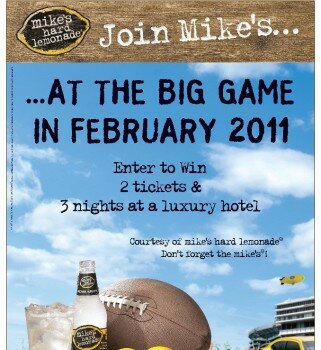 About Company: Mike’s Hard Lemonade Co. is a United States-based manufacturer of alcoholic beverages. It is named after its flagship and original product, Mike’s Hard Lemonade, a well-known mixture of lemonade flavor and an unflavored malt liquor base. The company was founded in 1997 by Anthony von Mandl. The company’s U.S. headquarters moved from Lakewood, Colorado (Denver), to Seattle, Washington, in 2005. One reason for the move was to be closer to its parent company Mark Anthony Group Inc. of Vancouver, B.C., Canada, a privately owned manufacturer and distributor of wines, hard ciders, and other alcoholic beverages.

Limit one entry per person, per email address, per day.

Two Grand Prize winners will each be awarded: Two tickets to the Big Game in Arlington, Texas on February 7th, 2011; transportation for two people to and from the Big Game (transportation chosen by Sponsor in its sole discretion); hotel accommodations for three nights (one standard room, double occupancy; hotel chosen by Sponsor) for winner and guest at luxury hotel and spa in Dallas, TX; $200.00 to be used for food and beverage; two tickets to a speaking engagement; two white panel souvenir footballs. ARV of each Grand Prize: $10,000.00 (USD).

Winners names will be posted on web site. To be notified of the winners, please send a self-addressed, stamped envelope to “Mike’s Big Game Texas Sweepstakes Winner List” PO Box 3193, Grand Central Station, New York, NY 10163.  All requests for the winner’s names must be postmarked by February 28, 2011.