Do your kids love Kidz Bop as much as mine? My 5 year old loves his Kidz Bop CDs, and wants to listen to them over and over. Kid Cuisine is giving away Kidz Bop music, mp3 players, and other great prizes in their instant win game. The exclusive website of Kid Cuisine Music Mania Instant Win Game sweeps is kidzbop.com/kidcuisine. Enter the Kid Cuisine Music Mania Instant Win Game for a chance to win 1 of 100 Coby MP837 MP3 players and Kidz Bop CDs! 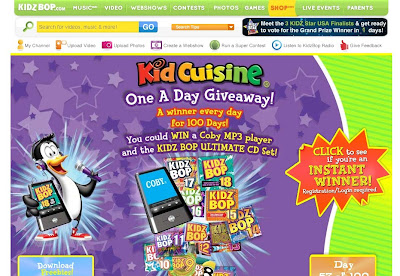 Kid Cuisine Music Mania Instant Win Game is open only to legal residents of the fifty United States and the District of Columbia who are at least six years old at the time of entry. Void where prohibited. The Promotion begins at 12:00 p.m. ET August 23, 2010 and ends at 12:00 p.m. ET, December 1, 2010.

To enter this sweeps, kidzbop.com/kidcuisine and follow the instructions to complete the registration form including your date of birth. Limit one game play per day per email and/or household address by any method or combination of methods of entry during the Promotion Period.

Limit one free game code per email and/or household address per day.