This time Google, a giant search engine brings surprise to all its users. Its fun, when you will go on Google home page at www.google.co.in, type “Who’s the cutest?” and then click on “I’m feeling lucky” button. 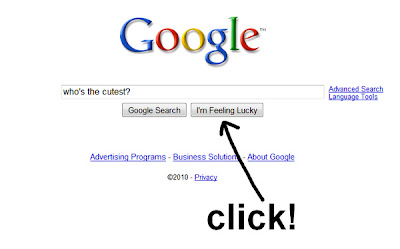 Once again, Google has introduced new technology that can be enjoyed by everyone, such as the next Google TV. Google Doodle has a tradition of introducing novel and entertaining doodles over and over again. This time Google has done something that has gone viral.

The method to know the answer is an elementary one. If you go to the search engine web site and type in “Who’s the cutest” and then click “I’m feeling lucky button”, you will get a nice surprise. Besides, “Who’s The Cutest” surprise, the two more terms are in row – “Where is Chuck Norris” and “lol limewire” that also follows the same course and are fun hitting.

Now, it seems that the top search engine on the internet, Google is really trying to market itself as a leader in the industry. The company integrated Google’s voice in the program therefore users can make free calls directly from their e-mail, some week ago.

Recently, some of Google’s graphics are also added by the company, including John Lennon, The Flintstones, and the birth of Google Doodle Holiday.

It is beyond doubt that Google has grown to become a leading technological innovator, as it now has launched cellular device operating systems in addition to a web-based e-mail platform. In the upcoming few weeks, Google Television will be released soon. Constantly, many users have wondered about the “I’m feeling lucky” button. It is really a way to get the directly first result yielded for a term without seeing all of another results.

Now all users are eligible to type in “Who’s the cutest” on the Google search engine web site, to get a special surprise. Additional terms that gives result includes a fun “where Chuck Norris” and “LOL LimeWire.” Enjoy the fun hitting “I’m Feeling Lucky” button and get a shocking result!