You are here: Home / OffBeat / What is Chipko Andolan Movement in India?

What is Chipko Andolan Movement in India?

The word ‘Chipko’ means “to stick” or “to cling”. Chipko Andolan or Movement is a socio-ecological movement that practiced the Gandhian methods of Satyagraha and non-violent resistance. It is the main technique to throw the arms around the tree trunks, which are selected to be cut and refusing to move. Villagers of the Himalayan foothills of Uttar Pradesh organized the Chipko Andolan or Chipko movement against the commercial forest policy of the State government. 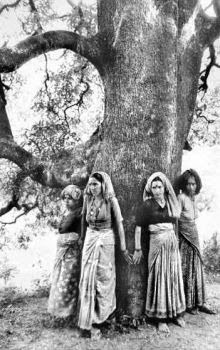 According to ancient legend, a girl whose name is Amrita Devi died when she trying to protect the trees that surrounded her village. At that time, the tree cutters of Local Maharajah reached to cut the villager’s trees for wood for his new castle. Amrita and others also jumped in front of the trees and hugged them to protect them. By attempting this valiant method, Amrita died and also save the destruction of forest.

In the early 1970s, the modern Chipko movement started in the Garhwal Himalayas of Uttarakhand with aim to grow awareness towards rapid deforestation. Kalawati Devi is one of the main leaders of Chipko Andolan in Garhwal Himalayas of Uttarakhand. The result of the disastrous floods was the awakening of the village folk in which many villages were washed away in 1970. Villages were enlightened this disaster to take up cudgels against random cutting of trees.

The man who has been relentlessly leading the Chipko Andolan movement, Sunderlal Bahuguna says, “Every standing green tree in the Himalayas is a sentry against the fury of the floods and landslides. Trees not only maintain the ecological balance but also give man the five F’s – food, fodder, fuel, fertilizer and fibre. If a single tree has to be cut down at all, at least three others should be nurtured in its place“.

On March 26, 1974 the landmark event was occurred when a group of female peasants in Reni village, Hemwalghati, in Chamoli district, Uttarakhand, India, acted to stop the cutting of trees and regain their traditional forest rights. This was the starting of the Chipko movement again. The contractor system of the State Forest Department threatened them and transpired many grassroot level actions, throughout the region.

Throughout India, the movement was spread rapidly by the 80s. Most of people adopted the forest policies and prevented open cutting of trees in regions as far arriving as Vindhyas and the Western Ghats. The United Nations Environment Programme publishes a feature which is reported the Chipko Movement thus: ‘In effect the Chipko people are working a socio-economic revolution by winning control of their forest resources from the hands of a distant bureaucracy which is concerned with selling the forest for making urban-oriented products.’