A Couple Whale-Watching Off Cape Town were surprised by a Southern Right Whale jumped onto their yacht off the coast of South Africa. Before the whale crashed down on top of their boat and then slid back in to the water, the couple just had time to take cover. A reason for the Whale breached the water and then landed on the Werner’s boat may be the poor eyesight of an endangered species southern right whale. 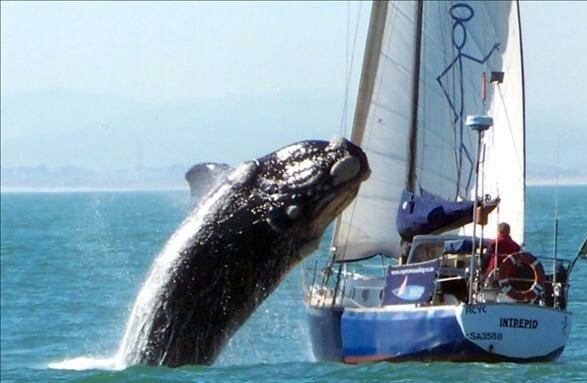 Just seconds before it crashed on top of the yacht, a nearby tourist from Botswana managed to snap this photo of the whale coming out of the water. They also took an ‘after’ photo of the damage the whale left behind. According to the BBC, “The leaping whale was photographed by a tourist on a nearby boat”.

The BBC reported on Wednesday, “the whale was about 33 feet long. Paloma Werner said she and her partner, Ralph Mothes, where whale-watching off Cape Town when the whale, a member of a species known for poor eyesight, jumped out of the water and landed on their boat, snapping the mast before sliding back into the water.” 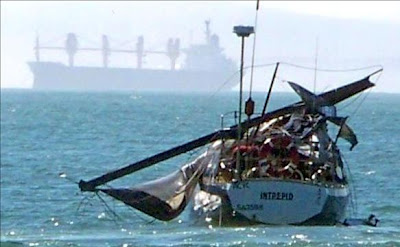 Ms. Paloma Werner and her boyfriend Ralph Mothes said that they first spotted the whale about 100 feet away from their boat and then all of a sudden it was right beside them. The couple run the Cape Town Sailing Academy so they are experienced sailors. Werner said, “Our boat’s engine was off and so the whale just didn’t know we were there,” and “We were just the wrong boat, in the wrong place at the wrong time. 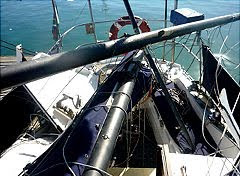 “Instinctively, I took cover as the mast came crashing down. I saw my partner, Ralph, dive for cover behind the yacht’s wheel. Then the whale slid down the side of the boat and back into the water,” she said. Paloma Werner and her boyfriend Ralph Mothers were sailing when it all happened. Werner said, “We were very lucky to get through it, as the sheer weight of the thing was huge. Miraculously nothing happened to us. He was just having fun.” She added, “They have very poor eyesight and obviously their breaching visibility is very poor. The whale did not intend to attack us”.