You are here: Home / OffBeat / Wear Purple on October 20 if You Support GLBT

Wear Purple on October 20 if You Support GLBT

Today on 20th October, 2010 people wears purple to give tribute to 6 boys who committed suicide in their homes or at their schools because of homophobic abuse by other people. This day is celebrated as a “Spirit Day” event. 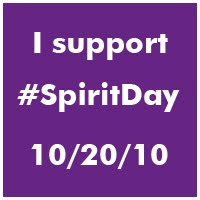 Spirit on the LGBT flag is represented by Purple. In order to signify their opposition to the bullying of homosexuals, Americans wears purple to celebrate “Spirit Day” event. There is no specific center is arranged for this event that will take place on October 20. Just announcement is done by the strangers who tell the people they know.

A teenage girl from Canada sent out a call for a worldwide lesbian, gay, bisexual and transgender Spirit Day following numerous suicides by gay teens. She posted or re-posted her call for remembrance from blogs to Facebook to other social networking sites which spread across the Internet in a matter of days. It was announced in her Tumblr account that people to wear purple on October 20 in reminiscence of those bullied and harassed for their sexual orientation.

Brittany McMillan said, “On October 20th, 2010, we will wear purple in honor of the seven gay boys who committed suicide in recent weeks/months, many of them due to homophobic abuse in their homes or at their schools”. “Purple represents Spirit on the LGBTQ flag and that’s exactly what we’d like all of you to have with you: spirit. Please know that times will get better and that you will meet people who will love you and respect you for who you are, no matter your sexuality.”

Not only Tyler Clemente but also Asher Brown, Seth Walsh, Justin Aaberg, Raymond Chase and Billy Lucas were victim of persecution for being gay. Tyler Clemente was recent teenage victim of harassment for being gay. He jumped off the George Washington Bridge and the reason behind this suicide is streamed video of a classmate’s gay sexual encounter which is put on the Internet.

“There are accomplices out there: uncaring teachers, criminally negligent school administrators, classmates who bullied and harassed Tyler,” said Savage. “‘Christian’ churches and hate groups that warp some young minds and torment others, politicians on the right and left who exploit and perpetuate anti-gay prejudice, perhaps even Tyler’s own family.”
Besides remembering the lives lost, the main aim of the Spirit Day is to raise awareness of problems that arise from bullying based on sexual orientation. “For about a year or two in high school I had a few jocks that would shout gay, queer, and fag a couple times a week,” junior Eric Kiturkes said.

8th grader, Asher Brown shot himself in the head after suffering abuse by other students while Seth Walsh hung himself at 13 after school officials ignored the problem. By sawing following three of five suicides thought related to struggles with sexual identity, Justin Aaberg hung himself at 15. Raymond Chase hung himself at 19 and Billy Lucas hung himself at 15 after making administrators aware of his LGBT bullying, and they did nothing. 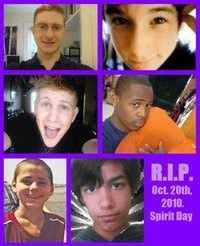 2009 National School Climate Survey was published in this summer by the Gay Lesbian and Straight Education Network which was based on the bullying of gay teens. It was founded that almost 9-out-of-10 LGBT students in the survey of 7,261 middle and high school students were found victims of harassment at school. Almost two-thirds felt unsafe in the past year because of their sexual orientation. Almost a third of LGBT students skipped at least one day of school in the past month because of worry for their own safety.

“Simply have teachers being observant and teaching them how to intervene would be a start to ending [this bullying],” said Kiturkes. “Teachers are all too often silent, because they don’t know or don’t feel comfortable stepping in to say something. Or they let their own feelings get in the way and choose to ignore it because they don’t agree with it.” Gay rights groups from across the country have joined in, addressing the recent suicides.

“Words have consequences, particularly when they come from a faith leader,” said Joe Solmonese, President of the Human Rights Campaign. “When a faith leader tells gay people that they are a mistake because God would never have made them that way and they don’t deserve love, it sends a very powerful message that violence and/or discrimination against LGBT people is acceptable.”