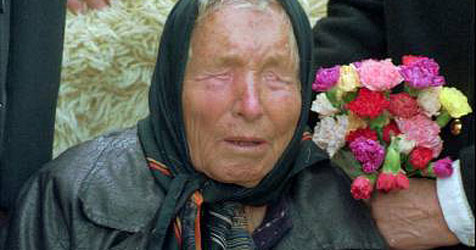 Vangelia was a normal girl in her childhood time. Her father was recruited into the Bulgarian Army when World War I occurred. When she was very young, her mother died. So she became alone and depended on her neighbors. She was very clever with blue eyes and fair-haired. Then her father got married second time for his daughter.

Vangelia’s life totally took a turn, when she was swept away through a tornado and flung on the ground, she found alive but her eyes were covered by sand and dust and she was not able to open the eyes. Her family had not enough money just for the partial operation, as a result her eyesight was failing and she lost her eyes forever.

At just age of 16, she started to predict and in very few days she became well-known for the correctness of her predictions. One time, her elder brother wanted to conscript in the army, however she requested not to join as she had vision that he will die at the age of 23 if he joins it. Even she denied for this, her brother joined the army and he was caught by Germans and killed at the age of 23.

She married at the age of 30 with Dimitar Gushterov who was from a village near Petrich. First time, Dimitar met to Vangelia when he came near to her for asking about killers of his brother. At that time Vangelia put condition that he had to promise her for not to look for revenge.

After marriage, Dimitar was enlisted in Bulgarian Army. After suffering from another illness, he fell into alcoholism, and passed away on 1st April 1962.

Vangelia recorded her prediction on a tape and gave this tap to her grand-daughter just before her death. She predicted for the 9/11, however was not alive till this. She passed away at age of 85 on 11th August 1996. In her funeral ceremony, the large crowds and lot of dignitaries presented. Vangelia’s last will and testament indicated to turn her Petrich house in to the museum. Her wishes fulfilled and the museum started on 5 May 2008.

2008: Assassination efforts on four heads of states. Clash in Indonesia which becomes one of the causes for begin of WWIII.
2010: The WWIII war will start in November 2010 and end in October of 2014. First it will initiate as a normal war, and then will include usage of nuclear and chemical weapons.
2011: No animals or plants will be left in Northern Hemisphere because of the radioactive showers. Against Europeans who are still alive, Muslims will start chemical war.
2014: As a result of chemical wars, most of the people will have skin cancer and skin related diseases in this world.
2016: Almost Europe is empty.
2018: The new world power will be China.
2023: Slightly the earth’s orbit will alter.
2025: Still Europe is scarcely populated.
2028: A new energy source development. (Probably controller thermonuclear reaction) Hunger slowly stops being a problem. Piloted spaceship to Venus deploys.
2033: Polar ice caps dissolve. World ocean levels increase.
2043: Economy of World is prosperous. Europe is run by Muslims.
2046: Any organs can be mass produced. Substitute of body organs becomes the preferred method of treatment.
2066: During its attack on Rome that is under control of the Muslims, U.S.A. uses a new method of weapons – has to do with climate alter. Sharp freezing.
2076: No class society (communism).
2084: The renewal of the nature.
2088: Just in few seconds people are getting old – New disease.
2097: This disease is healed.

2100: The dark side of the planet Earth is lighted up by the manmade Sun.
2111: People become robots.
2123: Wars among small countries and big countries don’t get evolved.
2125: (People will be reminded of Vanga again) In Hungary the signals from Space are received.
2130: (Advices from aliens) Colonies under water.
2154: Animals become half-humans.
2167: New religion.
2170: Big drought.
2183: (Same way as U.S. did from England) Collony on Mars becomes nuclear nation and is asking for independence from the Earth.
2187: Two volcano eruptions are stopped effectively.
2195: With energy and food, sea colonies are fully supplied.
2196: Full combination among Asians and Europeans.
2201: On the Sun, Thermonuclear reactions slow down. Temperatures Drop.
2221: Human beings engage with something very freighting in seek out of Alien life.
2256: New disease into Earth will be brought by spaceship.
2262: Progressively orbits of planets start to alter. Mars is under a threat of being hit by a comet.
2271: Physic properties are calculated over, since they changed.
2273: New race by mixing of yellow, white, and black race.
2279: (Probably from vacuum or black holes) Energy out of nothing.
2288: New contacts with the aliens. Travel through time.
2291: Sun cools. Again attempts to fire it up are taken.
2296: On the Sun bright flashes. Force of gravity changes. Old space stations and satellites start to fall.
2299: There is a partisan uprising against Islam in France.
2302: About the universe new important laws and mysteries are uncovered.
2304: The mystery of the Moon is uncovered.
2341: Something frightening is closing in with Earth from the space.
2354: Accident on one of the man made suns will outcome in drought.
2371: Strong hunger.
2378: New and fast growing race.
2480: Two man made suns will crash. Earth is in the dark.
3005: War on Mars. Trajectory of planets changes.
3010: Into the Moon, Comet will ram. There is a belt of rocks and dust around Earth.
3797: everything living on Earth dies by this time. However humans are able to put in the essentials for the commencement of a new life in a new star system.
3803: By a few humans a new planet is populated. There are few contacts among people. The climate on the new planet causes people to commence mutating.
3805: Humans go to war over resources. More than half of people die out.
3815: The war is over.
3854: The development of civilization virtually stops. People live flocks similar to animals.
3871: New prophet tells people regarding moral values, religion.
3874: From all segments of the population new prophet receives support. Organized a new church.
3878: New people forgotten sciences along with the Church to re-train.
4302: New cities are growing in the world. New Church encourages the development of new technology and science.
4302: The development of science. Scientists discovered in the overall impact of all diseases in organism behavior.
4304: A treatment for any disease is discovered.
4308: Human mutations result in people using their brains over 34% and losing notions of evil and hatred.
4509: Getting to Know God. Man reaches a level of development that can communicate with God.
4599: People attain immortality.
4674: The development of civilization has reached its peak. There are about 340 billion people living on dissimilar planets. Assimilation begins with aliens.
5076: Humans find the universe boundaries.
5078: The decision to leave the boundaries of the universe. While about 40 percent of the population is in opposition to it.
5079: End of the World.