You are here: Home / OffBeat / Vaishali Kasaravalli dead due to kidney failure

On 27th September, 2010 Veteran film and theatre actress, and director Vaishali Kasaravalli passed away at the Manipal Hospital Jayanagar in Bangalore at 5.00 pm after a prolonged illness of chronic diabetic. She was also undergoing dialysis for renal malfunctioning. Vaishali Kasaravalli had been in poor condition for the past few years. She was attending the hospital every now then due to her bad health condition. 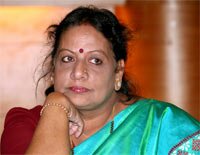 The 59-year-old actress lived with the National Award winner husband Girish Kasaravalli, son Apporva and daughter Ananya Kasaravall. Vaishali got the National Award for Best Costume for the film ‘Thayi Saheba’. She was also the recipient of the Rajyostava Award for her contribution to visual media. She bagged the national award for costume designing in “Tai Saheba”. She won accolades for her popular television serials “Muttina Torana” and “Moodala Mane”.

Her son Apporva took all the responsibilities of her mother television serial ‘Muthina Thorana’ and Ananya Kasaravalli with her father attending to the medical care. Kannada Film Chamber of Commerce President, Basant Kumar Patil described her as “one of the most creative artistes whose death has created a void in the Kannada film industry. She was the muse for Girish, a path-breaker who has many national awards in his kitty including the recent one for Kannada Film “Kanasemba Kudureyana Yeri”.

In the late ’90s, Vaishali was into politics and contested for the Bangalore City Corporation elections in 1996 from the Lok Shakti party but she lost. She was a staunch admirer of former chief minister Ramakrishna Hegde.

Character-actress Umashri, who has been closely associated with Girish and Vaishali, said: “She was a multi-faceted personality, an inspiration to all of us, a role model who participated in every creative process of her husband”. Chief Minister Yeddyurappa has mourned the death of Vaishali Kasaravalli. Yeddyurappa said the state had “lost a versatile artiste and director” in his condolence message. He said the multi-faceted artiste exhibited her talent as supporting actor and director of TV serials.

The contribution of Vaishali Kasaravalli in Kannada cinema is memorable and would always be remembered.