A&E’s dramatic series ‘The Glades’ follows Jim Longworth (played by Matt Passmore), an attractive, brilliant, yet hard to get along with homicide detective from Chicago who wrongfully punished and banished to Florida for having sex with his former Captain’s wife. Longworth relocates to the sleepy, middle of nowhere town of Palm Glade, Florida after being banished from the department where the sunshine and golf are plentiful and crime is seemingly at a minimum. Only this town outside the Florida Everglades isn’t quite as idyllic as he thought, as he finds people keep turning up murdered. 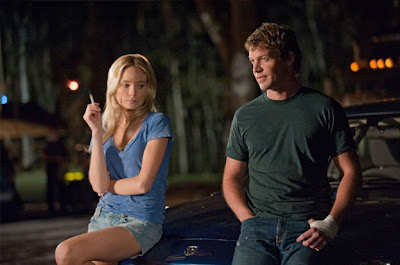 In the first ‘Pilot’ episode of “The Glades”, Longworth’s golf game is interrupted after a decapitated, unidentifiable woman is found in a creek, begrudgingly dragging Longworth off the golf course in pursuit of her killer. His crush on Nurse Callie, a hot and savvy nurse, further complicates matters. Longworth does everything he can think of to try and identify the victim and find the killer, even pestering his golf partner Carlos who’s the medical examiner.

Longworth needles, cajoles, and harangues everyone in his path in “The Glades” on A&E with a Titleist sitting on the fourteenth fairway waiting for him to break eighty for the first time in his life, including his golf partner and department medical examiner Carlos (Gomez), as he puzzles out the facts surrounding the mysterious killing to try and identify the victim and bring her killer to justice.

Titled: Bird in the Hand
Episode: 2
Premiere Date: July 18 2010
Synopsis: Jim Longworth takes Callie’s son Jeff to a heavily-wooded area to collect bugs for a school science project. In the effort, they stumble upon an abandoned airplane with a dead body inside. The victim turns out to be a retired Special Ops guy who taught flight school lessons on the side to make extra money. The trail leads Longworth to a sexy graduate student studying exotic birds, a rich and powerful drug dealer and a pair of brothers who like joy-riding in airplanes, giving the Chicago P.D. transplant one complicated murder case.

Titled: A Perfect Storm
Episode: 3
Premiere Date: June 25, 2010
Synopsis: Longworth gets his first taste of a Florida hurricane, but instead of waiting out the storm, he gets swept up in a murder investigation that appears to be a spree killing and he must find the killer before there is another victim. Meanwhile, due to the storm, Callie and Carlos deal with a massive influx of patients at the hospital and a power outage leads Carlos and Daniel to take extreme measures in order to save lives.

Titled: Mucked Up
Episode: 4
Premiere Date: August 1 2010
Synopsis: Jim is introduced to the intensely competitive world of Florida high school football as the small town of Pahokee prepares for the annual “Muck Bowl,” an event that draws national attention because of the many NFL players who came from that area and who have played in that game. When the dead body of a businessman emerges from the muck in a sugar cane field days before the big game, Longworth must figure out who would want the man dead. Pohokee’s star player appears to be the most viable suspect, but Longworth’s boss, Colleen Manus, warns him not to cause a disturbance in Pahokee since the game means everything to the community. But Longworth is not going to let anything, not a little muck and certainly not a football game, stand in the way of getting the killer or killers.

Titled: The Girlfriend Experience
Episode: 5
Premiere Date: August 8 2010
Synopsis: Longworth gets a nightmarish call from Daniel that Carlos has been found dead. Longworth is speechless and horrified at the site of his face-down dead body, but not as horrified as the real Carlos who is alive and pissed off. Thanks to his daughter’s internet shopping addiction, he was the victim of identity fraud by the murder victim. Longworth tracks the victim to the fake-Carlos’ girlfriend who is a social anthropology doctoral student who has many research subjects who are emotionally attached to her. Longworth tracks down each of her subjects in his quest to find the real killer.