You are here: Home / OffBeat / Southwest Airlines Most Valuable Passenger Sweepstakes on southwest.com/mvp 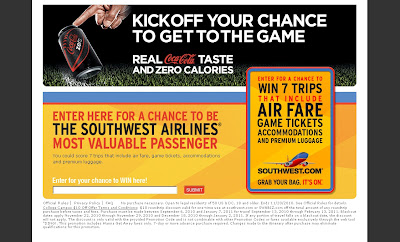 To enter Southwest Airlines Most Valuable Passenger Sweepstakes, visit official website southwest.com/mvp and follow the links and instructions to complete the registration. Complete and submit the registration, including providing a valid home address. P.O. Boxes are not permitted. You will automatically receive 1 entry into the Sweepstakes.

The Sweepstakes is sponsored by Coca-Cola North America, a division of The Coca-Cola Company, One Coca-Cola Plaza, Atlanta, GA 30313 and by Southwest Airlines, 2702 Love Field Drive, Dallas, TX 75235 (the Sponsors).

Southwest.com: Southwest Airlines Co. is an American low-cost airline. The airline has its headquarters on the grounds of Dallas Love Field in Dallas, Texas. Southwest is the largest airline in the world by number of passengers carried per year. Southwest maintains the third-largest passenger fleet of aircraft among all of the world’s commercial airlines. As of May 3, 2009, Southwest operates approximately 3,510 flights daily.

Limit: 1 Sweepstakes entry per day during the Promotion Period.

1 GRAND PRIZE: 1 premium luggage set (make/model determined by Sponsors in their sole discretion) and 7 trip packages for 2 to any destination serviced by Southwest Airlines. Each trip package consists of 2 roundtrip, open destination tickets on Southwest Airlines valid for travel from a major airport near winner’s home serviced by Southwest Airlines to a destination of winner’s choice serviced by The Southwest Airlines (tickets valid on Southwest-operated, published, scheduled service only as determined by Sponsor in its sole discretion); 2 night hotel accommodations at Sponsor’s choice of hotel (single room, double occupancy); a $500 Gift Card (terms and conditions apply) that may be used to purchase 2 tickets to the football game of winner’s choice (subject to availability) or for any other purpose; $500 spending money in the form of American Express Gift Cheques. Approximate Retail Value: $18,300. Total ARV of all prizes: $18,300

Winner List requests will only be available after the promotion end date (listed above). To request a list, send an email with Subject Line: “Southwest Airlines Most Valuable Passenger Sweepstakes” to .