Sonya Thomas won the contest in 12 minutes by eating 4.86 pounds of chicken. Sonya Thomas seemed to be a little on the short and skinny side to do what she did and while the chicken wing eating contest went on in Buffalo people gathered around to see this little miracle at work. 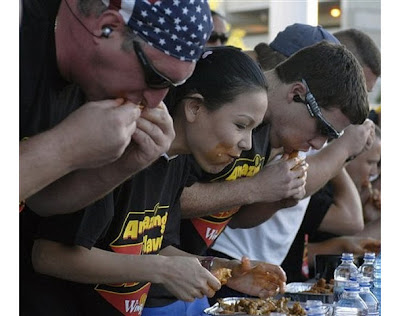 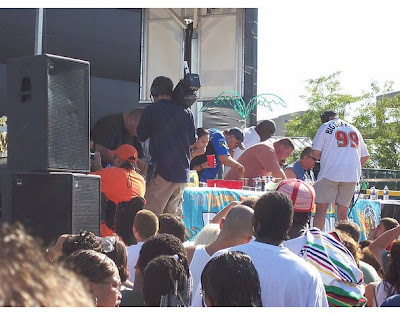 The title of the new eating contest champion is won by Sonya Thomas. She sailed past Joey Chestnut who recently came in the news for winning the hot dog eating contest. Joey Chestnut, who is more than a foot taller than Sonya Thomas and 125 pounds heavier, was left biting her dust as the competition came to a close and all Sonya Thomas had to say was that this was ‘just an appetizer.’

Sonya Thomas calls herself as ‘Black Widow’ and she explains the reasoning behind the title: she can often defeat much larger and heavier opponents. If one can look at the size of Sonya Thomas one would find it hard to believe that a person of that size could eat so much but then there are many things in this world which are hard to comprehend.

Sonya’s rival Joey Chestnut, of San Jose, Calif., America’s No. 1 professional eater, was the favorite in Sunday’s competition. Too bad, he came in second after eating 169 chicken wings, or 4.55 pounds (1.37kls). It was a “neck and neck” battle really, said Drew Cerza, the founder of the festival.

“They pushed each other really hard,” Cerza said. “Joey is so strong. He’s got great jaw strength. But Sonya’s so fast with the hand.”

Thomas, who stands 5 feet and weighs 105 pounds who often defeats bigger male competitors like Chestnut who is 6-foot-2 and weighs 230 pounds. She set the previous wings record in 2005, when she ate 174 in 12 minutes.

There are many big names in the competitive eating world, but there is a rising star on track to overtake them all: Sonya Thomas, aka The Black Widow. The 41-year-old is an intimidating competitor in the consumption ring,

Her secret for the Sunday’s triumph was her fancy finger work. While performing in the eating contest, she twirled the wings in her small fingers while quickly tearing off the meat.
“Sometimes if I try to chew too much I slow down,” she said. “I used my hands more than the mouth.”