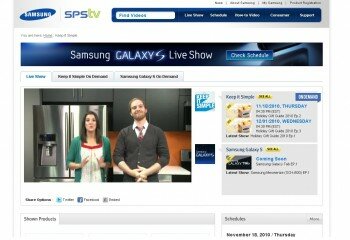 About samsung.com: The Samsung Group is a multinational conglomerate corporation headquartered in Samsung Town, Seoul, South Korea. It is South Korea’s largest chaebol and the world’s largest conglomerate by revenue with an annual revenue of US $173.4 billion in 2008. The Samsung Group comprises numerous international affiliated businesses, most of them united under the Samsung brand including Samsung Electronics, the world’s largest technology company by sales.

To enter the Contest, go to http://www.samsung.com/spstv and complete the official entry form by providing your first and last name, complete mailing address, e-mail address, phone number (including area code) and date of birth and upload a video or link to your video on YouTube that answers the question posed or discusses the topic presented (the official entry form and video shall be referred to herein as the “Entry”).

Limit: Limit one Entry per person and per e-mail address for the duration of the Contest Period.

Winners: The names of the winners (available after January 15, 2011) and/or a copy of these Official Rules may be obtained by mailing a self-addressed, stamped #10 envelope to: Samsung SPSTV “Viewer Appreciation” Sweepstakes – Winners/Rules (please specify which), P.O. Box 295, Gainesville, VA 20156, for receipt no later than March 15, 2011. VT residents omit return postage on rules requests.