You are here: Home / OffBeat / Roger Huerta Street Fight to save woman in Texas

Roger Huerta Street Fight to save woman in Texas

Around 2 a.m. on Saturday Morning, 27-year-old UFC veteran and current Bellator lightweight, Roger Huerta fought with a man in front of a bar in Austin, Texas who punched a woman during a brawl who was standing near the ruckus. Huerta’s friend tried to stop him from fighting but Roger run after the attacker and placed him on the ground. 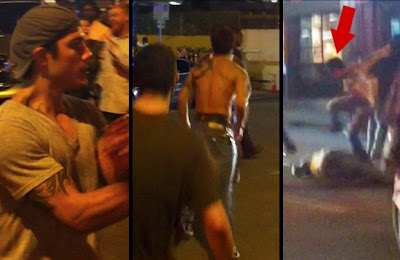 According to TMZ.com, Heurta came to the rescue of a woman involved in a domestic dispute. When Huerta saw a woman fallen down to the ground, he instantly tried to confront the attacker saying, “You just punched a f**kin’ girl.”Moments later, Huerta takes off his shirt … slams his hat to the ground … and rushes after the man.

Lightweight Roger Huerta tackles an attacker after watching the attacker knock out a female shown in video shown posted by TMZ.com. Huerta’s friend is seen rushing over and shouting “Roger!” in an effort to stop Huerta from engaging, but Huerta chases after the attacker and leaves him laid out on the ground. Huerta spoke of possibly fighting in Dream or K-1 with Bellator’s permission, after he lost Bellator’s lightweight tournament semifinals in May, but nothing yet has come out of it.

Huerta’s manager tells TMZ, “I have not spoken to Roger yet about this incident, but I can say that it’s in his nature to be very protective of women.” UFC president Dana White has also commented on the situation, telling TMZ, “In no way do I condone street fighting, but when a guy puts his hands on a woman he deserves to be knocked the f*ck out. Good for Roger.”

After back-to-back loses to Kenny Florian and Grey Maynard, Huerta (21-4-1) was released from the UFC in the year 2009. Currently, he competes in the rival promotion Bellator Fighting Championships. He is chosen among the eight fighters scheduled to compete in the promotion’s second lightweight tournament.