You are here: Home / OffBeat / Poison in Tap Water – Real or not?

Poison in Tap Water – Real or not?

Is your tap water is poisonous? In some cities across America, Poison tap water can impact the health. A Passaic Valley Water Commission drinking water treatment plant was analyzed by Researchers at the U.S. Geological Survey serving 850,000 people residing in the region around Northern New Jersey and found a metabolized angina medicine and the mood-stabilizing carbamazepine in drinking water. 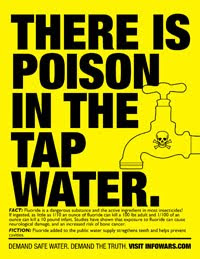 Researchers from the universities of Hiroshima, Oita, Japan conduct analysis that small amounts of lithium in the drinking water may decrease the suicide rates of the population, published in the British Journal of Psychiatry. A vast array of pharmaceuticals like antibiotics, anti-convulsants, mood stabilizers and sex hormones are founded in drinking water which was supplied to least 41 million Americans.

A new campaign was launched by Alex Jones to inform the public about the toxic chemical fluoride being added to tap water across the country. While EPA scientists and workers are calling for an end to water fluoridation, the government is doing everything in its power to carry on and even raise the amount of toxic chemicals being added to public water supplies.

A 2008 Scientific American report concluded that “Scientific attitudes toward fluoridation may be starting to shift” as new evidence emerged of the poison’s link to disorders affecting teeth, bones, the brain and the thyroid gland, as well as lowering IQ. “Today almost 60 percent of the U.S. population drinks fluoridated water, including residents of 46 of the nation’s 50 largest cities,” reported Scientific American’s Dan Fagin, who is an award winning environmental reporter and Director of New York University’s Science, Health and Environmental Reporting Program.

Lithium is a naturally occurring long been used in treatment of bipolar irregularities for over years now. Lithium mood is stabilizer in both extremes of the spectrum depression and mania dissimilar to traditional antidepressants. The research has been based on the study conducted on different communities based on the amount of lithium in their drinking water.

The CDC says that arsenic occurs naturally in rocks and soil. It is also a byproduct from copper, mining, and coal and is an ingredient in some pesticides. Many orange groves use chemical pesticides containing arsenic, contributing to the high levels. Arsenic in wells can occur from past use of fertilizers, pesticides, herbicides and from industrial use, in addition to naturally occurring arsenic.

From 18 different municipalities in Oita Prefecture of Japan, Scientists measured levels of lithium in the drinking water and found quantities which range from 0.7 to 59 micrograms per liter to follow this research. Then they compared these figures with the rates of suicide in each community. With the highest density of lithium in the water, the researchers found that suicide rates were lowest in the municipalities.

“Our study indicates that very low levels of lithium in drinking water can reduce the risk of suicide,” wrote the researchers. “May not have very low levels have an impact antisuicidal”. Sophie Corlett received mental health reason, non-profit results with caution. “We already knew that lithium can act as a stabilizing force for the mood of the people who suffer from bipolar disorder, and treatment of people with lithium is also associated with lower rates of suicide,” she said. Should be treated, “but also to a large lithium and unpleasant side effects in larger doses, and can be toxic. Any suggestion to add to it, even in small quantities, to drinking water with caution and research is very comprehensive.”