Nissan Keep Summer Rolling Sweepstakes is offered at Keepsummerrolling.com. People have a golden opportunity to win one of the Nissan vehicles such as a 2010 Nissan 370Z Coupe, with sports package; a 2010 Nissan Murano SL, with leather & premium package or a 2010 Nissan Maxima 3.5 SV, with rear spoiler! Plus, instantly win 1 of 500 Nissan Maintenance Plus Bronze Basic I Vehicle Service Plans! So visit Keepsummerrolling.com and take part in the sweepstakes, which has been already started from 1 August 2010 and will end on 31 October 2010. 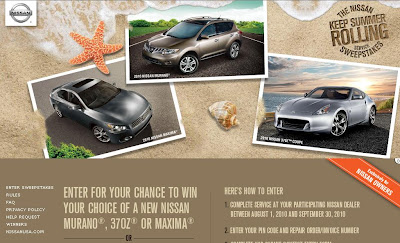 Keepsummerrolling.com is the website of Nissan USA. A richly diverse group of people made Nissan Company. Nissan believes that cars should change the world and the way people move through it. Nissan’s manifesto is committed to build vehicles on a new decade that are more efficient, more beautiful, more inspiring and more human than ever before. Nissan Company builds cars and trucks with the power to change both the way of viewing the world and the way people move in it.

To enter Nissan Keep Summer Rolling Sweepstakes, visit keepsummerrolling.com and complete service at your participating Nissan Dealer between 1 August 2010 to 30 September 2010, enter your pin code and repair order/invoice number, complete and submit the online entry form. Nissan Keep Summer Rolling Sweepstakes is open only to legal residents of the fifty (50) United States and the District of Columbia, who are at least eighteen (18) years old at the time of entry and who, as of 1 August 2010, own a Nissan automobile and have a valid driver’s license.

Administrator will conduct the Grand Prize random drawing on or about November 15, 2010. Requests must be received by: December 31, 2010.