You are here: Home / OffBeat / NCSY’s The Big Apple Giveaway Sweepstakes on ncsyapple.com 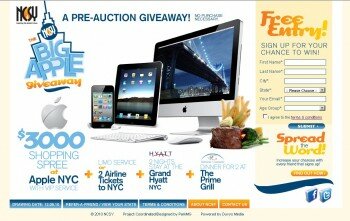 About company: NCSY is a Modern Orthodox Jewish  youth group sponsored by the Orthodox Union. Founded in 1954,it has members in the United States, Canada, Israel, Chile, and formerly also in Ukraine. Its slogan is Inspiring the Jewish Future. NCSY is directly supervised by the Orthodox Union’s Youth Commission chaired by Martin Nachimson of California.

Limit one entry per person or email address; however, you may receive additional Sweepstakes entries by referring a friend using Facebook, Twitter, or e-mail.

To obtain a copy of these Official Rules or a list of winners, mail a separate, self-addressed stamped envelope by February 1, 2012  to:  NCSY, Attn: Rina Emerson Orthodox Union 11 Broadway, New York, NY 10004, Attention: “The Big Apple Giveaway” Sweepstakes Winner’s Name.  The name of the winner will be available after December 31, 2010.  The winner’s name will also be posted at www.ncsyapple.com, which will be available through February 1, 2012.