Birthday Wishes To Our Super Star Prince Mahesh Babu We Wish A Big Success Ahead!

Mahesh Babu celebrating his 35th birthday on August 9. Fans all over the globe are making elaborate arrangements for the birthday celebration and reportedly, Mahesh Babu’s wife Namrata Shirodkar has gifted him a brand new Range Rover Vogue as a birthday gift. 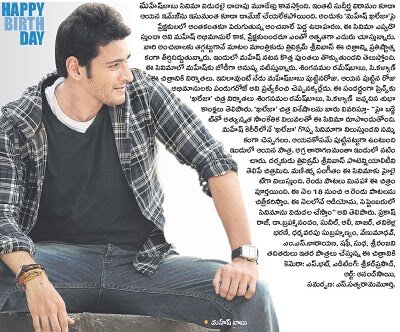 Superstar, Tollywood Prince Mahesh is all set to rock the screens in few days. Fans have been eagerly waiting for his film since Athidhi, which was released almost three years ago. Mahesh joined hands with Trivikram, who gave him Athadu, one of the memorable films in his career. The duo is striking back to show Khaleja and the fever has already started growing on Prince fans. According to producer Singanamala Ramesh Babu, the entire shooting is complete, except two songs which will be shot abroad from August 18. The audio will hit the stands in the beginning of September and the makers are planning to release the film in the last week of September.

Mahesh, who proved to be the right successor of Superstar Krishna, has surpassed his father in many aspects. He is being regarded as one of the fine actors of this era. Two Nandi awards as the best actor and three other special jury awards prove his caliber as an actor. He is also one of the very few heroes who can set box-office on fire. His Pokiri showed new heights to Tollywood market and its record was intact until Magadheera surpassed it.

Mahesh fans are expecting Khaleja to go past Magadheera and put Prince on the throne again. He is one actor who stays away from controversies and keeps his personal life away from public focus. He never boasts of his success and doesn’t hesitate to respect his seniors. He was the first to state that “Chiranjeevi is the last number one hero of Telugu cinema”.

Charming Prince turned 36 today and we at Maastars and MAA wish him a very happy and prosperous birthday.