Nike Basketball is recognized for their imaginative approach to visuals and now it has revealed LeBron James’ ‘Rise’ Commercial. Lebron James’ commercial for Nike called “Rise” has been telecasted on Tuesday, 26 October 2010, during the big match between Miami and Boston, where the Heat took on the Celtics. In “Rise” commercial, the controversial Miami Heat star, LeBron James showcases all sides of his personality and his doings in a clever and fascinating manner. 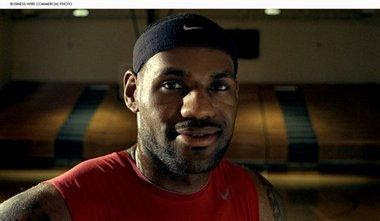 The Miami Heat star announced that he was leaving Cleveland for Miami; then his enemies like Charles Barkely dared to condemn him. He took shoots at all his enemies. When Miami played Boston, the ad was telecasted and it got lots of publicity. The ad is very imaginative and amusing with a Don Johnson cameo and LeBron James. To join Dwyane Wade and Chris Bosh, LeBron James arrived in Miami this summer.

A grin out of even biggest critics of LeBron James will be gotten by his new “Rise” commercial. The former Cavaliers player asked the viewers “What should I do?” in the clip. This new video is neither very captivating nor interesting similar to Tiger Woods’ ad that featured his dead father and created waves in the media. In the ad, James borrowing the famous Charles Barkley line, “I am not a role model” is the most highly inspected part of the commercial.

Vice President of Nike Global Brand Marketing, Davide Grasso said, “In ‘Rise,’ we amplify LeBron’s voice,” and “We’re celebrating his courage to forge his own journey even when others may have disagreed with his decisions. It’s this Just Do It spirit that defines LeBron and Nike as we strive to inspire all young athletes.” ‘The Big Three’, Paul Pierce, Kevin Garnett and Ray Allen were first assembled by the Celtics in 2007, since then they have been the NBA’s big three.

The newer, leaner and meaner version is Miami’s version of LeBron James, Dwyane Wade and Chris Bosh. LeBron James made his abrupt move from Cleveland to Miami and went from much-loved to maybe the most maligned. LeBron is asking a simple question in his new Nike commercial entitled ‘Rise’, “what’s a young man supposed to do to get a little love around here?”