Jewish New Year, Rosh Hashanah starts on the first day of the seventh month of the Hebrew calendar, Tishrei. Rosh Hashanah is the ‘Days of Awe’ (Yamim Noraim), or ten days of repentance (Asseret Yemei Teshuva) that specifically conclude with the holiday of Yom Kippur or the ‘Day of Atonement.’ In all around the world, all Jews send greeting as L shana tova or simply Shanah Tovah to wish for Rosh Hashanah. In this current year, Jewish New Year 2010 has started on sunset September 8. 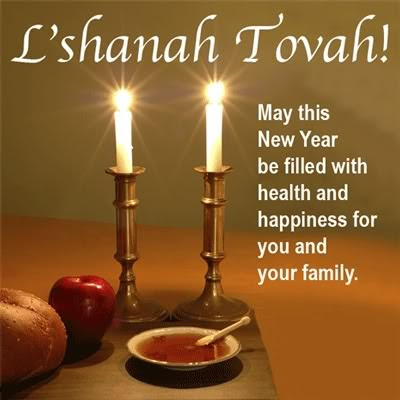 Rosh Hashanah is the first of the High Holidays or Yamim Noraim or Asseret Yemei Teshuva. During this holiday, Jews in the world send their warmest wishes to their family and friends such as L shana tova, Shana Tova, and Shana Tova U’Metukah. They also send honey cake that symbolizes a sweet new year. L shana tova is short form of “L’Shanah Tovah Techatemu VeTikatevu” that means “May You Be Inscribed and Sealed (in the Book of Life) for a Good Year.” Shana Tova is the usual greeting on Rosh Hashanah, that meaning in Hebrew is “A Good Year.” “Shana Tova U’Metukah” is also used as greetings by people which means “good and sweet year.”

During the Rosh Hashanah period, all Jews meditate their lives and events, and try to recognize the mistakes which they have committed in the past year. Usually, Jews wrote down the sins that they had committed on pieces of paper and floated on water. But nowadays, the paper use has been refused by reason of ecological problems and so now people use bread instead of paper.

This year marks the 5771 year since the world came into existence, according to the Jewish beliefs and traditions. On sunset September 8, 2010, the Rosh Hashanah has begun and continues till nightfall September 10, 2010. Every year the holiday falls on first day of Tishrei and ends on second day of Tishrei.

Jewish New Year help Jews to introspect their past and apologize for the future. They say sorry for their mistakes and ask forgiveness from those they have hurt somebody’s feelings and decide to make positive changes in their life and get ready for a sinless future.

Jewish New Year is signed with sound of blowing ram horn, known as ‘shofar,’ which is invented to serve as a wake-up call for world’s Jews. Numerous religious ceremonies are happened in Jewish houses and synagogues. In celebration, good food is also a very important part, an apple in honey dipped being one of the most important food that involves expect for the New Year.

Muslims community also celebrates as the Muslims Eid ul-Fitr or simply known as “Festival of the Fast-breaking” which is the time of increased devotion, repentance and good deeds. In both the tradition, the common themes is repentance, renewal and reflecting on mistakes. The main object of this celebration is the forgiveness for past sins. Yom Kippur is sacred day in the Jewish calendar that also called “Day of Atonement”. As the Ramadan of Muslims, it is also a fasting days.

Throughout Rosh Hashanah, the marketplaces are full of the entire ingredients for the meals of New Year’s festival which opens at sunset. Barack Obama, the President of U.S. disclosed a video for giving his best wishes for the New Year and emphasized the effort and the struggle of a two-state solution between Israeli and Palestinian leaders next week in Egypt. Mr. Obama expects for a deal in the next year while the Israeli appear to be more skeptical about this after many years of unsuccessful hard work, according to Prime Minister Benjamin Netanyahu. The Israelis Prime Minister said that there are many barrier and many reasons for skepticism and that although the talks are important in an effort to reach peace, there are no faith of success.