www.kozyshackrecipeshowdown.com is official webpage of Kozy Shack Recipe Showdown Sweepstakes. Submit a recipe that uses Kozy Shack products into Kozy Shack’s Recipe Showdown Contest and you could win a trip to Los Angeles to compete for the grand prize of $150,000 cash or your own cooking show, or $10,000 cash or a kitchen makeover. Other prizes include a consolation prize of $2,500 or first prizes of $500. 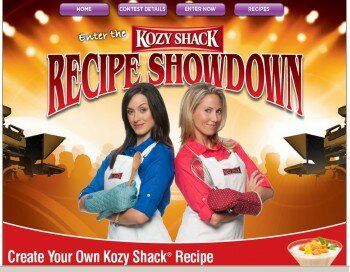 Limit: Only one entry per person and per email address for the entire Entry Period.

About Company: Kozy Shack, Inc. is a family owned company that has been producing quality desserts since 1967. Today, Kozy Shack and Freshway Distributors employ over 400 people dedicated to the production and distribution of the best tasting desserts. Kozy Shack associates always give special attention to upholding our high standards of quality and service. Never altering from its original principles, Kozy Shack, Inc. maintains a warm and welcoming culture.

How to enter: To enter Kozy Shack Recipe Showdown Sweepstakes, visit kozyshackrecipeshowdown.com and follow the instructions.

Prize: Two Event Finalist Prizes are available: A trip for two people to Los Angeles, CA with the opportunity for the Event Finalist Winner to participate in the Kozy Shack® Recipe Showdown Event on a date to be selected by Sponsor, currently anticipated to occur in late January or early February 2011; exact date will be communicated to winners by Sponsor; all dates are subject to change. Location of the Kozy Shack® Recipe Showdown event may be changed at the Sponsor’s sole discretion. Prize consists of round-trip coach-class air transportation from major airport nearest the winner’s home to Los Angeles, CA; two nights double-occupancy hotel accommodations; ground transportation to and from the Kozy Shack® Recipe Showdown Event; and $500 spending money. ARV of the Prize: $3,000.

The event winner will be invited to select one of one hundred sealed envelopes to determine his/her Bonus Grand Prize for having won the Showdown Event. A single sealed envelope (1:100) will contain a message indicating “Your Own Cooking Show (or $150,000 cash equivalent)”; the other ninety-nine envelopes (99:100) will each contain a message indicating “$10,000 kitchen makeover”. The $10,000 kitchen makeover, if selected, will be delivered in the form of a check. The “Your Own Cooking Show (or $150,000 cash equivalent),” if selected, consists of round trip coach air transportation for two persons between major airport nearest winner’s home and New York City, three nights double-occupancy hotel accommodations, and the opportunity for the winner to participate in one full day at a television studio or other interior location to tape material to be edited into a half-hour cooking show to be aired by Sponsor as paid programming on a cable channel. Prize includes the services of a director, scriptwriter, editor, shooting crew, hair and makeup artist, wardrobe stylist and prop stylist. Selection of dates for trip, taping and airing, as well as content of program, cable channel and locations for airing, are all in sponsor’s sole and absolute discretion; in addition, all other conditions set forth above for the travel prize to the Showdown Event also apply. (ARV $150,000). If the winner receives and selects the $150,000 cash equivalent option, it will be delivered in the form of a check. The other Event Finalist Winner will receive a consolation Bonus Grand Prize of $2,500, delivered in the form of a check. Eight First Prizes are available: A check for $500.