You are here: Home / OffBeat / Kosik – The Talking Elephant of South Korea

Visitors and scientists are attracted by Kosik, a male Asian elephant, who has unique ability to vocalize various Korean words. Kosik utters many Korean words like “yes,” “no,” “sit,” “lie down,” and four other words. Kosik is twenty-year-old elephant born in 1990 and lived at Everland Theme Park in South Korea. 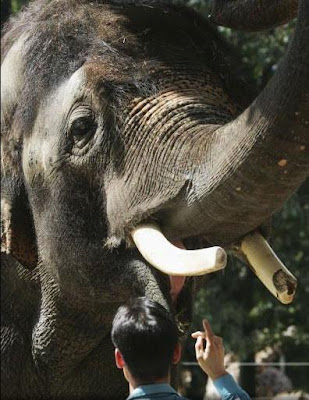 According to Kosik’s trainer, Kim-Jong Kap, since Kim-Jong Kap discovered the Kosik in 2006, its pronunciation has improved greatly. At present, Kosik is able to speak several words in Korean, like “hi” and “good.” Human whistles with fingers in his or her mouth similar to that, it makes the sounds by putting his trunk in his mouth and shaking it while breathing out. Director of the zoo in Seoul, Kwon Su-wan, said: “We plan to conduct further studies with keepers, veterinarians and scientists on whether Kosik understands the meaning of these words as he speaks them.“

To study the exceptional elephant, Dr. Daniel Mietchen has come to South Korea with other researchers from the University of Jena in Germany. As per their research, Kosik may disclose that elephants are capable of learning language, though other elephants have exhibited the ability to mimic the sounds of trucks but they have doubt that he actually grasps the meaning of the words he talks.