HGTV Urban Oasis 2010 giveaway is offered by HGTV Dream home. The winner of HGTV’s newest home giveaway is awaited by a new contemporary residence with sweeping vistas of the New York City skyline. The first HGTV Urban Oasis is located in The Residences at W New York-Downtown, 123 Washington Street which was Custom-designed by the network’s popular designer Vern Yip. The promotional period of the HGTV Urban Oasis giveaway started on 1st September and will end on 20th October, 2010. 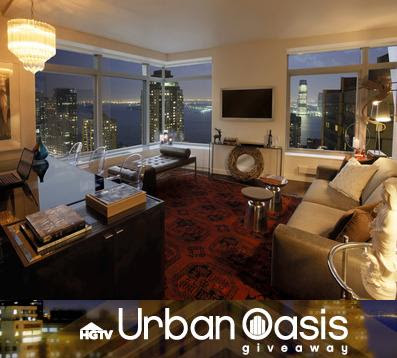 Viewers can enter daily to win the grand prize package, valued at approximately $1.5 million, that includes the fully-furnished residence and an Acura ZDX. On Monday, September 6, 2010, at 8:00 p.m. ET/PT, the HGTV Urban Oasis 2010 provided a special offer. Online users can enter once per day via HGTV.com and once per day on HGTV’s FrontDoor.com till October 20.

Eligibility: This Sweepstakes is open only to legal residents of the U.S. and its territories, possessions and commonwealths who are 21 years of age or older as of September 1, 2010, except employees and members of their households, whether or not related, and immediate families of Sponsor and Acura Division of the American Honda Motor Co., Inc.

How to Enter: One can enter the Home & Garden Television (“HGTV”) – HGTV Urban Oasis Giveaway℠ sweepstakes (the “Sweepstakes”) in any of the following ways:

Limit: one entry per stamped envelope. Mechanically reproduced or hand-stamped entries or mailing labels or entries generated by script, macro or other automated or mechanical means will not be accepted. Incorrect, illegible, corrupt, and incomplete entries are void.

General Prize Conditions: All federal, state, and local taxes on prize are winner’s responsibility. All costs, taxes, fees, and expenses associated with a prize or the acceptance and use of any element of a prize not specifically addressed above are the sole responsibility of the winner. The Grand Prize Winner will be issued a 1099 tax form for the ARV of the prize. The specifics of all aforementioned elements of any prizes in the Sweepstakes shall be solely determined by Sponsor. Some restrictions may apply. Sponsor reserves the right to substitute any prize, or portions thereof, with a prize of comparable or greater value, at its sole discretion. Prizes cannot be transferred, substituted or redeemed for cash except at Sponsor’s sole discretion.

Winner’s List: Beginning on or about December 22, 2010 you may obtain the name of the Grand Prize Winner, either by going to the HGTV Website (www.hgtv.com), the Front Door Website (www.frontdoor.com), or mailing a self-addressed stamped envelope to: HGTV Urban Oasis Giveaway Winner’s List, PO Box 51573, Knoxville, TN 37950. Requests received after January 22, 2010 will not be honored.