Google Project 10 to the 100th is a call for ideas to change the world with the help of as many people as possible. More than 150,000 ideas were submitted by thousands of people from more than 170 countries. The final 16 ideas were narrowed down for public vote. The most votes were received by five ideas and they are the winners of Project 10 to the 100. Google has reviewed concrete proposals to tackle these ideas, more than the past 12 months. Five inspiring organizations, which are working on solutions to each of these global challenges, got a total of $10 million. 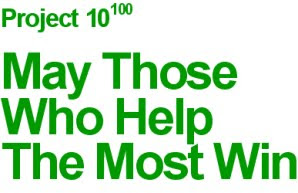 People believe that Google has so much information, so many tools at their disposal, and so many ways of making good ideas come to life that are never in history. Up till now, many people of all walks of life could use so much help in both little ways and big at the same time. New studies are reinforcing the simple wisdom in the midst of this, that increases individual happiness over time is helping other people, beyond a certain very basic level of material wealth.

The winners of Google project10 to the100:

A non-profit educational organization, The Khan Academy provides high-quality, free education to anyone, anywhere through an online library of over 1,600 teaching videos. The Khan Academy is receiving $2 million to support the creation of more courses and to enable the Khan Academy to translate their core library into the world’s most widely spoken languages.

A non-profit organization, FIRST promotes science and math education around the world through team competition. Its aim is to motivate young people to be science and technology leaders by providing them real world experience working with professional engineers and scientists. FIRST is receiving $3 million to develop and begin new student-driven robotics team fundraising programs by which, more student teams will empower to participate in FIRST.

Shweeb is a concept for short to medium distance, urban personal transport, by using human-powered vehicles on a monorail. Shweeb is receiving $1 million to fund research and development to test technology of Shweeb for an urban setting.