You are here: Home / OffBeat / Girl died on her sixteenth birthday, crashed by bus

Girl died on her sixteenth birthday, crashed by bus

POLICE have named two teenager girls killed in a crash involving a school coach and car on the A66 near Keswick.

A 49-seater coach, carrying students from Keswick School, overturned after colliding with a grey Honda Civic  at the Braithwaite turn off at around 3.47pm yesterday.

Cumbria police said Keswick School pupils, Chloe Walker from Frizington, who turned 16 yesterday (24 May), and 15-year-old Kieron Goulding, from Whitehaven, were passengers in the coach that was on the school run when it collided with a grey Honda Civic.

The driver of the Honda Civic, a man, also died at the scene, but has not yet been formally identified. 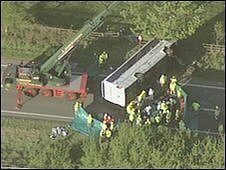 The A66 was closed until 3am while emergency services cleared the scene and began conducting a thorough investigation.

Five teenagers from the coach were seriously injured and remain in hospital.

There were around 35 further pupils who police described as walking wounded. They were taken to Braithwaite School where paramedics and doctors were on hand to treat their injuries, which ranged from minor cuts to fractures and spinal injuries.

An investigation has been launched.