Giant Goldfish, 30 pounds weight, has been recently caught in the south of France. This giant Goldfish surprised everybody, but some people thought that the picture of the giant Gold fish is a Photoshop trick. The weight of giant Goldfish (30 pounds) has been confirmed by few spectators. The monster fish was caught by Angler Raphael Biagini. When Angler Raphael Biagini saw this fish, he could not believe his own eyes. A gold fish is generally small, at present; the largest gold fish on record measures 16 inches (41 cm) and weighs 5 pounds (2.3 kg) was caught in a pond in Poole, England in July 2010. 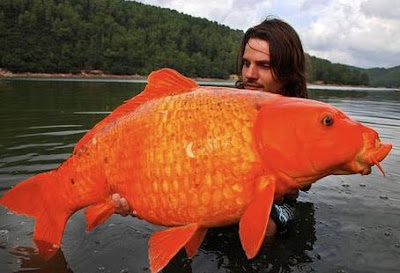 According to Marine experts, the fish which everybody is seeing isn’t a hoax. The color and the size are not impossible. Several months ago, the record Koi, 90 pounds weighed, was caught. People have started saying that the man holding the giant fish seems it is only of a couple pounds, not much heavy. Whilst the size of the fish indicates that it must be more than 30 pounds itself. The looking similar to giant goldfish is a 30 pound Koi carp.

The color of the fish is stunning but, because of the colorless background, orange scales are amplified slightly in the photo. 3 fingers of fisher man are visible, though they look like paul bunyans fingers because of the wide-angle lens used to capture the entire fish which would increase the size of the fish and the outskirts of the picture horizontally. The shadows seem to match up fairly well, keeping in mind the current of the water. If you grip an inkpen with your fingertips, then they turn white, his hand has done the same under the back fin. That are the facts which proves that really giant goldfish has been caught.