You are here: Home / OffBeat / Funeral Ceremony in Toraja – the practice of walking the dead

Funeral Ceremony in Toraja – the practice of walking the dead

The funeral ceremony is the most complicated and expensive event in Toraja society. To have an extensive death feast, only nobles have the right in the aluk religion. Generally, the death feast of a nobleman is attended by the lots of people and carries out for several days. Ceremonial funeral structures are specially made by the deceased family and a ceremonial site is made in a large, grassy field where shelters for audiences, rice barns. 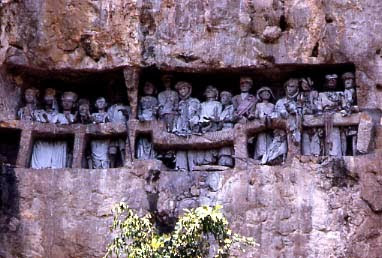 Toraja expresses the sorrow with the exceptions of funerals for young children, and poor, low-status adults by flute music, funeral chants, songs and poems, and crying and wailing are traditional. After the death the ceremony is often held weeks, months, or years as a result the deceased’s family can raise the significant funds needed to cover funeral expenses. Traditionally, Torajans believe that death is not a sudden, sudden event, but a gradual process toward Puya (the land of souls, or afterlife). The body of the deceased is wrapped in several layers of cloth and kept under the tongkonan during the waiting period. Until the funeral ceremony is completed the soul of the deceased is thought to linger around the village and after that it begins its journey to Puya.

The sacrifice of water buffalo: 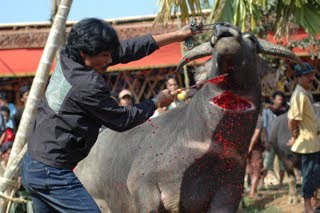 The further procedure of Funeral Ceremony is the sacrifice of water buffalo. If the more powerful person died then the more buffalo are scarified at the death feast. Buffalo carcasses are lined up on a field waiting for their owner, who is in the “sleeping stage“. According to the Torajans, the dead person will need the buffalo to make the journey and that they will be quicker to arrive at Puya if they have many buffalo. Massacring tens of water buffalo and hundred of pigs using a axe is the climax of the elaborate death feast, with dancing and music and young boys who catch spurting blood in long bamboo tubes. The slaughtered animals are given to the deceased’s family by guests as “gifts” which are carefully noted because they will be considered as liability for deceased’s family. 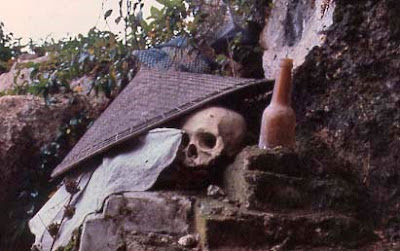 There are three methods of burial. First method of burial, the coffin may be laid in a cave or second method is in a carved stone grave and third method is hung on a cliff. It includes any possessions that the deceased will need in the afterlife. If the died person is belong from rich family then he/she buried in a stone grave carved out of a rocky cliff. Generally, the the grave is pricey and takes a few months to complete. A stone cave may be found in some areas which is large enough to accommodate a whole family. A wood-carved effigy called as tau tau which is placed in the cave looking out over the land. The coffin of a baby or child may be hung from ropes on a cliff face or from a tree. This hanging grave usually lasts for years, until the ropes rot and the coffin falls to the ground.

Dance and music in the Funeral Ceremony at Toraja: 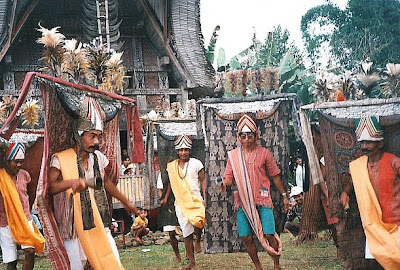 On several occasions, Torajans perform dances mostly during their elaborate funeral ceremonies. To express their sorrow, to tribute and even to cheer the deceased person, the people of the Torajan danced in the funeral ceremony because he is going to have a long journey in the afterlife. In the starting or on the first day of the ceremony, a group of men form a circle and sing a monotonous chant throughout the night to honour the deceased (a ritual called Ma’badong). It is considered as the most important component of the funeral ceremony. On the second day of funeral ceremony, the Ma’randing warrior dance is performed to praise the courage of the deceased during life. With a sword, a large shield made from buffalo skin, a helmet with a buffalo horn, and other ornamentation, all the men perform the dance. The Ma’randing dance precedes a procession in which the deceased is carried from a rice barn to the rante, the site of the funeral ceremony. Elder women perform the Ma’katia dance while singing a poetic song and wearing a long feathered costume during the funeral.

The Ma’akatia dance is performed to remind the audience of the generosity and loyalty of the deceased person. After the bloody ceremony of buffalo and pig slaughter, a group of boys and girls clap their hands while performing a cheerful dance called Ma’dondan. The people of Torajans dance and sing during harvest time as in other agricultural societies. The Ma’bugi dance celebrates the thanksgiving event, and the Ma’gandangi dance is performed while Torajans are pounding rice.

There are many sorts of war dances like the Manimbong dance performed by men, followed by the Ma’dandan dance performed by women. When and how Torajans dance should be held? it is governed by the aluk religion. A dance called Ma’bua can be performed only once every 12 years. Ma’bua is a major Toraja ceremony in which priests wear a buffalo head and dance around a sacred tree.

Toraja is a traditional musical instrument which is made by bamboo. It is one of flute called a Pa’suling (suling is an Indonesian word for flute). At many dances, this six-holed flute is played. These dances types are the thanksgiving dances Ma’bondensan, where the flute accompanies a group of shirtless, dancing men with long fingernails. The Toraja have indigenous musical instruments, such as the Pa’pelle (made from palm leaves) and the Pa’karombi (the Torajan version of a Jew’s harp). Mostly, Pa’pelle played during harvest time and at house inauguration ceremonies.