You are here: Home / OffBeat / Friday the 13th Wiki – The unluckiest day

If the thirteenth day of a month falls on a Friday, then it is called as Friday the 13th, which is considered as one of the unluckiest day by superstition. This day occurs at least once in the Gregorian calendar, but at most three times a year. If the month starts on a Sunday, then that month’s 13th day will fall on a Friday. 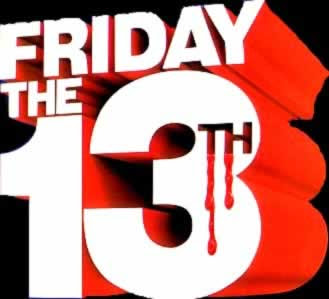 FRIDAY the 13th is probably a day most people would want to avoid, if they were planning to get hitched. FRIDAY the 13th word was derived from the Greek words “paraskevi” which means Friday, “dekatreis” which means 13, and “phobia” which refers to fear. The term, paraskevidekatriaphobia was derived in 1911 and first utilize in mainstream sources in 1953. According to people, some bad things happen on Friday the 13th. So, some buildings and hotels do not have a 13th floor. Some streets, on the other hand, do not have a 13th Street.

According to the Stress Management Center and Phobia Institute in North Carolina, the stock market slows down on Friday the 13th, and people postpone travel and spending, resulting in some $900 million lost in earnings in the U.S. 17 million to 21 million people suffer from phobia of Friday the 13th, which is considered by the institute. Friday was also considered as an unlucky day, since the 14th century, as it was believed that Jesus Christ was crucified on the cross on a Friday.

The number thirteen was considered irregular, transgressing completeness. There is also a superstition thought on Friday the 13th is that some derives from the Last Supper or a Norse myth, that having thirteen people seated at a table will result in the death of one of the diners. Black Friday has been associated with stock market crashes and other disasters since the 1800s.

According to ancient times, the sixth day of the week and the number 13 both have foreboding reputations, and their inevitable conjunction from one to three times a year (there happens to be only one such occurrence in 2010, in the month of August) portends more misfortune than some credulous minds can bear. Some people refuse to go to work on Friday the 13th, some would not eat in restaurants and many would not think of setting a wedding on the date.