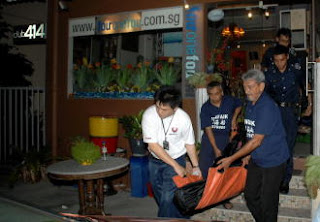 She also saw that there was man beneath the bed. The court heard that Mr Wee’s 36 year old lover Mr Eric Sin Hoo Kat and homos-sexual partner found under the bed. Now he was sent to Singapore General Hospital for treatment and was hospitalized for about a week.

Police found the condom packets, empty dr-ug casings and s-exual lubricants in a wastepaper basket and also found a game with s-exual instructions in the living room. Police also found 10 different kinds of pills including viagra, Cialis, Power1 Walnut and other Chinese brands.

Mr wee was also found to have taken Ketamine and s-exual improvement dr-ugs like Viagra. His partner told the police they had taken drugs like Ecstacy and Ketamine on two occasions. Mr wee got the drugs from a shop in Little India.