After getting stuck in a chimney, Dr. Jacquelyn Kotarac died while apparently trying to break in to her boyfriend’s home in Bakersfield, CA. 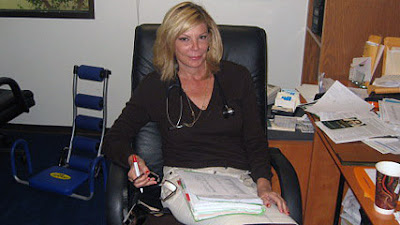 According to the police, she first tried to get into the house with a shovel, and then climbed a ladder to the roof, and after she removed the chimney cap she slid feet first down the flue. Officers with the Bakersfield Police Department went to a home in the 4300 block of La Mirada Drive on reports of a dead woman found lodged in a fireplace flue around 9 p.m. on Saturday. To extract Kotarac’s body, firefighters spent five hours late Saturday dismantling the chimney and flue from outside the home.

In 1991, Kotarac had completed her medical degree at a top-ranked University of California Los Angeles David Geffen School of Medicine. She was a board-certified Internist, who weekly saw nearly 200 patients. A doctor mixed up in an “on-again, off-again” relationship in fact tried to force her way into her boyfriend’s home by sliding down the chimney. Three days later, her decomposing body was found there.

Officials told that Kotarac’s office staff reported her missing two days earlier when she failed to show for work. Her car and belongings remained next to the man’s house. The man, who owns the house is William Moodie (58), runs an engineering consulting firm. Reached by telephone, Moodie did not comment about conditions that led to Kotarac death and more spotlight about the good thing she did in life. Kotarac was a superb internist who often provided service and medication free of charge to her patient, according to Moodie.

Moodie told The Associated Press, “She made an unbelievable error in judgment and nobody understands why, and unfortunately she’s passed away.” He added, “She had her issues – she had her demons – but I never lost my respect for her.”

This is a very sad story. Police do not suspect foul play in Dr. Jacquelyn Kotarac’s death. It is fateful that Kotarac made the decision to try to go down the chimney of her boyfriend’s house. The Bakersfield Police Department has been investigating the death as doubtful from the onset and there is no evidence of foul play.