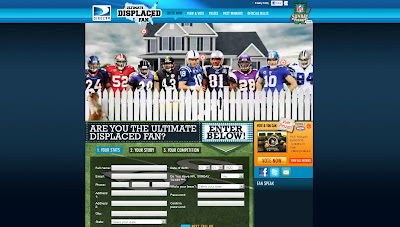 In order to enter in to the DirecTv’s contest, you have to visit the contest official website, ultimatedisplacedfan.com during the Contest Period where you will get the online entry form. To participate in the DirecTv’s contest, you require completing the on-line entry form, and uploading an essay in maximum 1000 words on the topic of “Are you the ultimate displaced NFL fan?” means participants must require to upload their essay on given topics like a fan who lives away from his or her favorite NFL team’s hometown and goes to great lengths to evidence commitment and dedication to his or her NFL team. Additionally, you can also upload maximum 5 photos and/or 1 video in your essay.

When you complete your DirecTv’s contest online entry form you will get one entry per person. If you want to get details about the contest, you can print contest Official Rules from the website.

At ultimatedisplacedfan.com, the videos of NFL are available for voting where you can cast a vote for your favorite entry from their Top 20 videos. Through your vote, you could get chance to win autographed memorabilia from Peyton or Eli Manning and a Kingsford BBQ Kit in our bi-monthly prize giveaways. The prizes of contest, last contest winner and official rules are provided on the website.

The contestant who will get highest points, he or she will be named the Ultimate Displaced Fan and will be awarded with the Grand Prize. With the second, third, fourth, fifth and sixth highest total points, the contestants will each win Honorable Mention Prizes.

The prizes of the DirecTv’s contest include one Grand Prize, five Honorable Mention Prizes and three Monthly Voting Prizes.

The Honorable Mention Prize winners will awarded with their choice of either one DIRECTV system that includes satellite dish and one HD/DVR receiver, and up to three DVR receivers with remotes and standard installation at winner’s residence and a twelve month subscription of DIRECTV CHOICE® programming with 2011 NFL Sunday Ticket or a check in the amount of $1,407. The total ARV of the Honorable Mention Prize is $1,407.

Monthly Voting Prize includes one autographed jersey (ARV: $500), football (ARV: $400) or photo signed (ARV: $250) by Peyton Manning or Eli Manning. Each monthly voting winner will also get one Kingsford Grill Kit with an ARV of $220.