You are here: Home / OffBeat / Canada Day Rally and Celebration in Ottawa, Ontario and British Columbia

On every 1st July, Canada Day is celebrated by Canadians. It is a day all the Canadians enjoy holiday by spending time with family & friends. The carnival will begin with more than 50 parade entries which will represent the country’s rich heritage mixed with its Irish, Celtic, bhangra and Samba flavours. There will be parades held in cities, towns, and villages all over Canada today. The parade will begin at 7:00 PM and will continue for an hour. 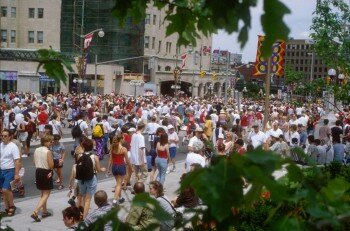 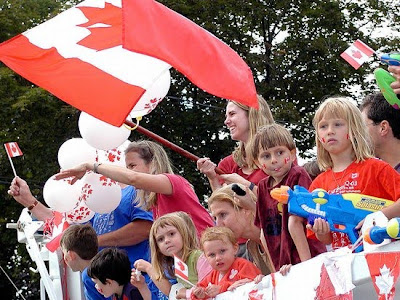 Many Canada Day events are celebrated all over the country, in Vancouver, Ottawa, Calgary, Toronto, Montreal, and in Victoria, where the flag will be recreated on the lawn of the British Columbia legislature, as it was last year seen in this picture. 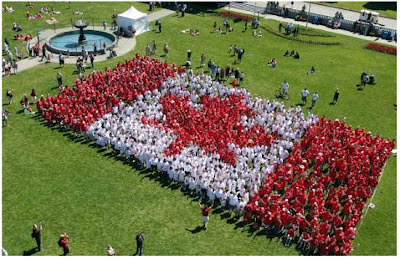 Queen Elizabeth is visiting Canada for a nine-day tour that ends July 6th in Toronto. She is in Ottawa for the holiday. This is her 22nd trip to Canada. 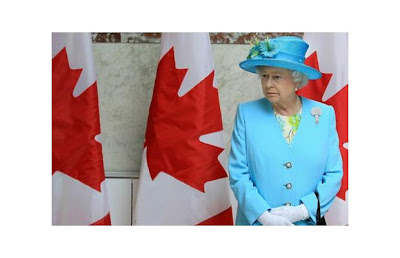 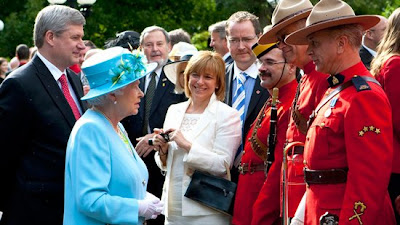 It was on this date in 1867 that the nation was officially born when the Constitution Act joined three provinces into one country: Nova Scotia, New Brunswick, and the Canada province, later it is split into Ontario and Quebec. Though, Canada was not completely independent of England until 1982. The holiday called Dominion Day was officially established in 1879, but it wasn’t observed by many Canadians, who considered themselves as British citizens. Dominion Day started to catch on when the 50th anniversary of the confederation rolled around in 1917. In 1946, a bill was put forth to rename Dominion Day, but arguments in the House of Commons over what to call the holiday stalled the bill. The 100th anniversary in 1967 saw the growth of the spirit of Canadian patriotism and Dominion Day celebrations really began to take off. Although quite a few Canadians already called the holiday Canada Day (Fête du Canada), the new name wasn’t formally adopted until October of 1982.

How will be Canada Day celebrated?

Canada Place will host its annual Canada Day bash. Daytime festivities will take place from 10 a.m. to 6 p.m, featuring acrobatic performances, music and dance on four different stages, a children’s zone with bouncy castles, facepainting and other activities. Musical guests include Vancouver band Hey Ocean! The Royal Canadian Mint will be on hand to allow people to trade in their change for a new one-dollar coin commemorating the centennial of the Canadian Navy.

The Canada Day parade, which is back for a second year after attracting 100,000 spectators last year, will wind its way through downtown starting at 7 p.m., featuring marching bands, colourful floats, dancers, mascots and other performers. The new parade route starts at Broughton and Georgia streets and ends at Melville and Thurlow streets.
The parade will be followed by the the Sails of Light display at Canada Place at 8:30 p.m.

Celebrations will take place at Granville Island, starting off with a pancake breakfast at the Dockside Restaurant between 7:30 a.m. and 11 a.m. Cyclists are encouraged to bring their bikes to the island and decorate them for a 1:30 parade, which will also feature stilt walkers and lion dancers.

To cap off city celebrations, the Canada Day Burrard Inlet Fireworks Show will host two simultaneous pyrotechnic displays: one off the shores of West Vancouver and one between Canada Place and North Vancouver. The show will start at 10:30 p.m. and will be accompanied by a musical broadcast on Shore 104 FM.