The 11-year-old Brooklyn girl, Briana Ojeda died on Friday because of one police officer who stopped her when she suffered from asthma attack and was going to hospital with her mom. Due to death of the little girl, the police officer Alfonso Mendez was suspended on Tuesday afternoon through the departmental charge of failure to take appropriate action. 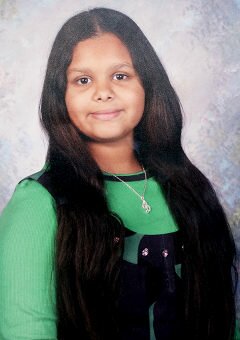 The Police Department declared that the officer who involved in the case, 30-year-old Alfonso Mendez will not be criminally charged. When NYPD spokesman Paul Browne asked if Mendez would be charged, said, “No.”

Police Commissioner Raymond Kelly told to reporters that not enough was known to determine if the man was an NYPD cop on Tuesday morning.

During a eulogy at St. Francis Xavier Church in Park Slope, Briana Ojeda’s dad, Michael said, “In times as difficult as these, faith is such a must.” Then he said, “You left us.” And reading from a poem in front of Briana’s white coffin as his wife, Carmen stood by him. “You’re always by our side. Our family chain is broken now . . . the chain will be again.“

At the funeral ceremony, many of the mourners wore white dress for responding Facebook request of Briana’s brother who wanted to draw attention to her youthful innocence.

Her coffin was carried out to a white buggy drawn by two white horses to Evergreen Cemetary in Brooklyn. Mourners put her casket in a white and glass hearse adorned with pink and peach flowers. While mourners were given white balloons which they released into the sky, a large crowd of white doves were released. All mourners cried, “I love you.” Before it was put in crypt, Briana’s grandmother Maria Ojeda cried over coffin.

Briana’s math teacher Rebecca Roldan said, “She was a wonderful little girl. I broke down when her coffin came in and stopped in front of me.” She also added, “She was absent a lot due to asthma. I have asthma too, and I would ask her about it because I knew. I wish all my students were like her. She was so nice to everyone. She was never mean. She was always smiling.”

CBS 2′s Pablo Guzman reported that neighbors turned the front steps of the girl’s home into a shrine. Her dogs were part of the farewell also. At the funeral parlor, David Aviles, and Anisia Perez, who were practically an uncle and aunt to the girl said they were relieved that the NYPD suspended Officer Alfonso Mendez.

Briana was about to enter the sixth grade at St. Francis Xavier School. After asthma attack, she died on Friday.

Carmen Ojeda was driving her car speedily on wrong way down a one-way street in Carrol Gardens for rushing Briana to a hospital when she sideswiped another vehicle.

The Ojeda family said that Carmen desperately requested Alfonso Mendez, a police officer who came at the scene, to help the dying girl.

She said Mendez, who is assigned to the 84th Precinct told her he could not do CPR, tried to give her a ticket and briefly boxed her in.

He said when he stopped at the scene after having gassed his vehicle up at the nearby 76th Precint house, he saw a Samaritan already performing CPR on the child and Briana had on an oxygen mask. Due to girl’s asthma, her mother always brought oxygen in her car.

Mendez accepted telling them he did not know CPR and said he accompanied them to Long Island College Hospital with his lights and sirens blazing. But they arrived so late.

Cops said that Mendez was needed to report about the scene of an accident where people were asking for assistance, but he failed to perform.

Initially, the NYPD assumed the officer was a traffic agent or private guard, and Internal Affairs prohibited all cops from the 76th Precinct. However then it extended the search to any officers from the NYPD or other agencies that might have been in the area.

Briana father, Michael said, “Finally, they found the one who did it. It’s a shame it took four days . . . It should never happen to any other child.” “I just pray to God to forgive him,” said Briana’s grandmother Marie.

After eyewitnesses picked his photo beyond a lineup, Officer Alfonso Mendez was suspended without pay.

Briana’s cousin Evelyn Luciano said, “The fact that they found the cop brings joy to our hearts. She was an amazing child.”

At his Queens home, Mendez avoided commenting, but his wife, Damaris, told to WCBS/Channel 2 that “he did what he could for [Briana].” She also said, “He’s destroyed. We have a little girl. I’m very sorry to her mother. If he could have done more, he would have.”

The published reports stated that the officer being accused is five year veteran Alfonoso Mendez. Melendez is accused of denying helping the young girl by performing CPR on the child who was suffering from a severe asthma attack.
Carmen Ojeda told NBC to New York, “I stopped and I screamed for him, ‘Help me please, can you help me? Can you assist me… give my daughter mouth to mouth? He told me he didn’t know CPR. The officer’s just standing there — he’s telling me I can’t leave because I have to wait for the ambulance.”

The police department expended time for trying to decide either an NYPD officer was really involved or it was a local security guard. Mendez worked in the 84th precinct in Brooklyn Heights; he was in the 76th precinct after reportedly stopping to get gas for his patrol car.

Police officials said that all NYPD cops get CPR training, thus it is not clear why Mendez would have said he did not know how to perform the procedure.