In southern California, a dead body has been found near the place where a 17 year old teen Norma Lopez went missing after finishing a class a nearby Valley View High School at 10:00 a.m. A local resident spotted the body at about 3 o’clock in the afternoon this Tuesday who informed the police about it; later on the police took it into custody. 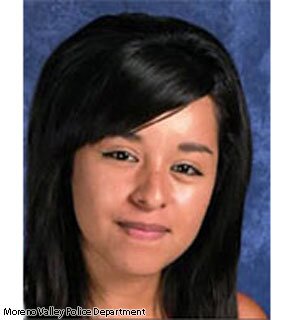 According to reports, the girl was kidnapped near the site where the dead body had been found. But authorities said they are not sure if the body found is Norma’s body. The body is suspected to be that of Norma Lopez as the place where the body was found is just about two miles from where it is believed she was abducted. It is expected that the killer might have thrown it into the thick fields so that no one may be able to find it.

Deputy of County Sheriff’s department, Nieburger told CNN, “We cannot confirm who it [the body] is or even the sex of the body. As far as identification, that can be anywhere from a day or five days depending on what we find.” And identification could take anywhere up to 5 days. Lopez was kidnapped on July 15, According to investigators. The local residents and the witnesses said that they saw a green colored SUV speeding away from the area from where the 17 years old girl went missing. The Police are still investigating over the matter along with the FBI. The case is now included in the National Missing and Exploitation Children database.

When she didn’t appear, the girls searched for a few hours then called police. Apparently, Lopez had no domestic issues. “We do not believe she’s a runaway. If we did believe that, we wouldn’t be here today,” Borja told reporters at a news conference on Friday. “If Norma’s out there, we’re looking for you. If you haven’t been taken, please call. We’re worried about you.“Deputies are looking for a driver and passengers in a newer model green sport utility vehicle seen in the area on Thursday.

The only information made public by authorities has been that personal items belonging to Norma Lopez were found and that police are looking for a newer model green sports utility vehicle, the occupants of which might know something about Lopez’ disappearance. A vehicle fitting that description was seen leaving the area at around the time of the girl’s disappearance.

Riverside County sheriff’s Deputy Melissa Nieburger said investigators were proceeding cautiously and wouldn’t be able to positively identify the remains for possibly several days. Borja said the people in the vehicle were only being sought for questioning, and may not be suspects. Lopez’s family pleaded to television cameras for the girl’s return.