On the occasion of Black Friday 2010, various companies are going to release deals and promotions for its customer. Some of the well-known retailers are Sears, Kmart, WalMart, Walgreens, Home Depot, Radio Shack, Dell, etc. which offer large discounts on their items. So, what are you waiting for? Just check out the hot deals given below. A market research firm, iSuppli researched that the Black Friday is the biggest shopping day of the year. Black Friday is celebrated on the next day of Thanksgiving Day. This year, Black Friday is on November 26, 2010. Many people have decided to go for shopping as Christmas shopping season has been kicked off. Online shopping is also available for those customers who don’t like to stand in long queue. Many retailers are ready with their Black Friday 2010 ads promotional materials like campaign posters, promo and coupon codes.

Sears is one of the biggest retailers, has leaked Black Friday 2010 ad entitled “Black Friday Now”. Sears publishes 2-day sale next week from October 29 to 30, 2010, which is considered as a standard weekly circular of Sears. Items like TVs, laptops, phones, Blu-ray players, toys and other new gadgets are included in these great deals. The purpose of this sale is to increase sales and for customers, it is chance to earn double the reward points for every $1 spent. It is expected that Kmart of the Sears Holding also going to introduce their “Better Than Black Friday” sales next Friday. Some of the deals are given below:

Harbor Freight also announced Black Friday 2010 ad which will be started from November 26 to November 28, 2010. The doors will be opened for Inside Track Club Members at 6am. The sale will run for 3 days, affecting 23 products. Coupons for the sale are available at the official website of Harbor Freight. Black Friday 2010 ad is also released by Kmart Toys which is especially for children. The promotion will be started on October 31st (Halloween) through November 24th (the day before Thanksgiving).The ad for Kmart is of 9 pages, consisting 330 items.

A Facebook event is planned by one of the popular bookstore Half Price Books. The event will take place on November 26th (Black Friday), entitled as “Early Bird Sale”. 20% off will be featured on all100 locations from 7 a.m. till 10 a.m. Toys“R”Us and Babies“R”Us products online sale has been started from October 26, 2010. Interested customers can buy online products and can access to over 7,500 items within two hours of ordering. According to Black Friday information, electronics-related deals at Toys R Us will be available from 31st October, 2010, that are: 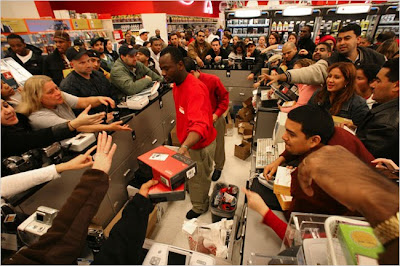 Thanksgiving Weekend Sale of True Value will be started from 26th November, 2010 through 31st November, 2010. Top 5 deals of 2010 Black Friday are as follows:

Amazon.com is one of the largest online stores of America with a very wide array of products that include electronics, apparel, furniture, music CDs, computer hardware and software, video games, food, toys. All of above products come with a great offer because of Black Friday. So, enjoy shopping with their Black Friday deals by visiting at the official website of www.amazon.com.

Best Buy is a specialty retailer of consumer electronics and entertainment software in the United States. It is one of the leading electronic retailers, which was founded in the year 1966. It has thousands of stores in the United States, Canada, and China. Products like televisions, DVD players, Blu-ray players, MP3 players, Home audio systems, car audio systems, computers, cameras, music, movies, software, games, video games, and home appliances are offered with great discounts at the official website (www.bestbuy.com).

Several other sites offer Black Friday 2010 ads, list is given below: