AT&T offers free 3G MicroCells Giveaway for just valuable customers. MicroCell is a device that will improve AT&T cellular party in “dead zones” by tapping into your home broadband connection. Cisco manufactures AT&T’s 3G MicroCell for people who do not receive good AT&T reception. It is connected for your own home internet connection and it acts as a small AT&T 3G towers for your home or office. 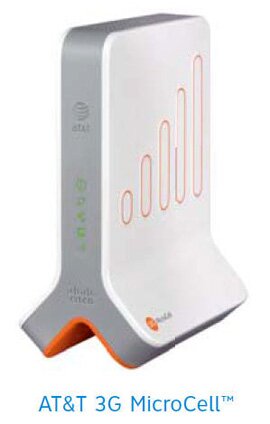 Over the weekend, reports from subscriber Engadget and Gizmodo gave details that customers were starting to receive notices in the mail saying that they qualified for the free MicroCells. Today, I found one of the letters in my mailbox. Normally, it would retail for $150.

AT&T declared that they would be fixing this problem not with increased coverage but instead with an additional peripheral called the 3G MicroCell. The AT&T 3G MicroCell is priced at $150. Probably 3G MicroCell is not something you are going to buy unless you get absolutely terrible coverage in your home as some things make it a not too noteworthy product.

First you need to plug 3G MicroCell into your home network and then it essentially turns into a mini cellphone tower. According to AT&T this should boost your reception dramatically, most times boosting it all the way up to 5 bars, but that is not the problem here. The problem is that after paying the initial $150, AT&T is going to ask you to pay an additional $20 a month for unlimited 3G MicroCell calling.

You can not choose the unlimited plan but you are going to be eating up your wireless minutes. Can you see the problem here? Not only is AT&T charging you for something they should be fixing themselves, but then they are actually charging you more to use your own home broadband connection.

If you grab the unlimited plan, you will be able to get a MicroCell for just $50 after a mail-in rebate and if you have AT&T broadband you can get the thing for free. But still, using your own minutes when you’re essentially making calls of WiFi is bogus.

However, if this is something that you are in desperate need of (read: no coverage whatsoever) AT&T has announced that their 3G MicroCell is available in all markets. AT&T confirmed that if you use a 3G MicroCell for a smartphone, that bandwidth consumed will count against your monthly wireless limit. AT&T is counting your own home bandwidth.

In April of 2010, AT&T began a phased roll out of MicroCells for hitting one market at time, until around mid to late June of 2010, each market was filled. Microcells are a part of hardware which are designed to increase your signal bars and if you are thinking maybe this has something to do with the iPhone 4 maybe that is the case and may be not. Besides a MicroCell should keep you from dealing with so many dropped calls and data transfers because it acts like a mini personal cell tower.

A MicroCell should mean you always have 5 bars in your home that extends to a 5,000 square foot area and acts as hotspot for up to 4 devices at once. Supposedly it is also a secure device that will not act as a hotspot for any devices that do not compute as a part of your authorized network. In order for it to work though, you need a 3G device, DSL or cable broadband service, and a computer where you are setting your MicroCell up to verify the location during the registration.

It is not cleared that how many customers will be getting this free gift, how long the offer will last, or what the criteria is for deciding who gets one. What seems like the most logical answer however is that people in areas which have been identified as being less than optimal in regards to signal strength or are outside of a certain radius from an AT&T cell tower will be the people receiving a free MicroCell.