Whole world gave sympathy to 28-year-old, Bethany Storro after she claimed a black woman had thrown acid on her face in an attack. But police revealed that the whole acid attack story was false after a two-week investigation. She has admitted that her injuries were self-inflicted. 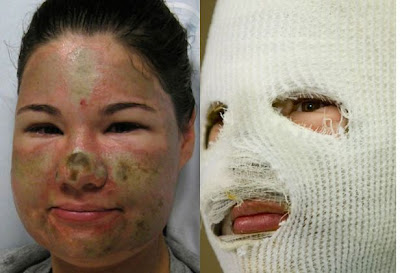 Clifford Cook, police chief of Vancouver said Bethany Storro admitted under police questioning to fabricating a story about the attack, in which she suffered severe burns. Police are now saying they saw inconsistencies in Storro’s story from the beginning, says ABC. Vancouver, Wash. police commander Marla Schuman explained Friday on Good Morning America: “Truthfully, there were red flags from the beginning,” she said. “Initially just the manner of the attack, when she’s talking about being splashed in the face with acid and the demarcation, the placement of injuries on her face… the thought that she was wearing sunglasses at 7:30 at night when she normally doesn’t wear sunglasses. Just small things that didn’t quite add up to a picture of normalcy.”

As per the Bethany Storro, she was just getting her things from a car after buying a pair of sunglasses when a black woman with a glass approached. The woman asked Storro “Hey pretty girl, do you want to drink this?” and before Storro could reply; the woman threw acid on her face. The acid burned Storro’s face as well as ripped through her clothing. “She never wears sunglasses, but she had a little extra money and bought a pair” Said her mother Nancy Neuwelt. Storro was treated to the hospital in Portland, Oregon and was considered in critical condition.

Face, genitals and almost 30% of the body of Storro has burned so, she is considered critical condition. After surviving meningitis, Storro already has difficulty in hearing and is thankful that her eyesight was spared. The women who thrown acid on Storro’s face was last seen wearing a green colored top and Khakis and the police have been able to produce a composite sketch. Storro say she doesn’t even know who the woman was and why she got splashed with acid on the face.

Umpqua Bank took up a collection to help her pay medical bills, raising “a few thousand” dollars, said bank spokeswoman Lani Hayward. By Friday, no one asked for their donation back, she said. “She is extremely upset,” said police Commander Marla Schuman. “She is very remorseful. In many ways it got bigger than she expected.” Schuman was asked whether Storro will face a charge of filing a false police report, to which she responded: “At this point, yes, that would certainly fit.”