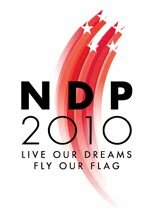 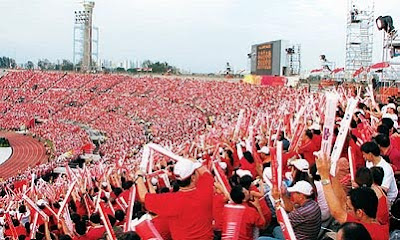 This year, theme of Singapore National Day Parade is ‘Live Our Dreams, Fly Our Flags’. Corrinne May, a Singaporean singer-songwriter will compose and perform the Theme Song for Singapore’s National Day 2010 which titled “Song For Singapore“. A dance version of the theme song which will be sung by Singapore Idols Sezairi Sezali and Sylvia Ratonel during the Parade & Ceremony after the Prime Minister takes his seat at the Padang.

Colonel Benedict Lim, the Chairman of NDP Executive Committee, said in a press statement yesterday: “2010 marks the 45th year of Singapore’s independence – a defining and significant milestone in the Singapore story. Flying our flag as a symbol of nationhood and hope is a yearly act for most of us during the National Day celebrations period. But this year we want Singaporeans to go beyond that by taking some time to reflect upon the nation’s achievements in a short span of 4 years, including social cohesion, racial and religious harmony, and how the nation had lifted itself time and again out of crisis. We want them to be inspired to live their dreams.”

The theme is ‘Live Our Dreams, Fly Our Flag’. The idea of the theme appeared that someone wishing upon a shooting star which is in charge of branding NDP 2010 for the designers at FARM. Thus, the charming idea for NDP 2010’s logo was produced.

Colonel Benedict Lim said, “It captures our collective hope for a better future and expresses our pride for the nation. Fly the flag in the literal sense of waving it at national events, and also in the figurative sense of being proud of Singapore, behaving in a manner that would do the country proud and showcasing Singapore to the world”.

In this year, the thirty contingents will join the Parade & Ceremony segment of the NDP. The Parade & Ceremony segment represents five pillars of the total defence including Military Defence, Civil Defence, Economic Defence, Social Defence and Psychological Defence. The 5 military and home team contingents from the Army, Navy, Airforce, Singapore Police Force and Singapore Civil Defence Force represent the military and civil defence.

The ten Uniformed Youth Organisations (UYOs) is structured by the Scouts, Girl Guides, Boys and Girls Brigade, Red Cross, St John, National Civil Defence Cadet Corps, National Police Cadet Corps, and the National Cadet Corps represents the psychological defence. There will be 10 social and economic groups from the PAP, NTUC, HDB, PUB, SingTel, SATS, ERA, Keppel Corp, Sembcorp Industries and Sembcorp Marine which represents the social and economical defence. There are four guards of honour groups from the 3 services of the Singapore Armed Forces (SAF) and the Singapore Police Force.

The crowds wear red, so whether you are at the event or watching it on one of the many big screens around the country, get into the spirit by buying one of the red t-shirts that are on sale around Singapore.

In Combined Band contingent, the students from the NCC Band combining with members from the SAF Band and Police Band will participate to offer the resounding beat for the participants.

From Army Headquarters, Lieutenant-Colonel Lek Seng Khoon will be the Parade Commander and from SAFTI Military Institute, Master Warrant Officer Albert Chen will be the Parade RSM. The audiences will be treated to the Aerial Display and Mobile Column recitals that take place in NDP once every five years, after the striding out from the Padang. For Singaporeans, Firework will shoot off from nine different locations including commercial buildings other than the parade ground, the rooftop of City Hall and the Marina Bay waters, the Esplanade, Suntec Tower, Pan Pacific Hotel, Ritz Carlton, UOB Tower and Maybank, all of which make for great vantage points for those who want to catch a quick look of the fireworks besides the Padang fields. At the Padang, audiences will be allowed in the heartlands to interact and engage with the activities.

To view that special view of the parade and fireworks, many have splurged on hotel rooms and restaurants at celebrations centre on the Padang this year.

Associate director, Marketing Communications, Swissotel the Stamford, Koo Sok Hoon said, “This year, we actually have more rooms to offer, as the Parade is at the Padang, compared to last year, where the Parade was at the Floating Platform. Besides locals, we also have some expatriates taking up our rooms for the National Day Parade.”

Competition like the new Marina Bay Sands, have not driven prices down. Swissotel said prices are slightly higher this year due to its location to the Padang. The hotel’s restaurant on the 69th floor is also fully booked. Diners who wish to have a window seat are charged an additional $20 per table.

At another restaurant nearer ground level, diners can catch the fireworks, listen to the 21-gun salute and watch the mobile columns, while sipping on the Singapore Sling cocktail which costs just $4.50 in celebration of 45 birthday of nation. The offer comes with every set dinner.

At the new Fullerton Bay Hotel, you may not get a direct view of the Padang but its rooftop restaurant gives a good view of the fireworks.

Giovanni Viterale, GM of The Fullerton Hotel and The Fullerton Bay Hotel said, “We have fantastic cocktails, packages with nice snacks up there. And so far, our venues are almost taken up.”

First time NDP 2010 will be recorded in 3D. But, it will not be telecasted in 3D. As a national event will be telecasted live from 5.30pm to 8.30pm (SST) across MediaCorp channels including Channel 5, HD5, Channel 8, Channel U, Suria, Vasantham, okto and Channel NewsAsia International