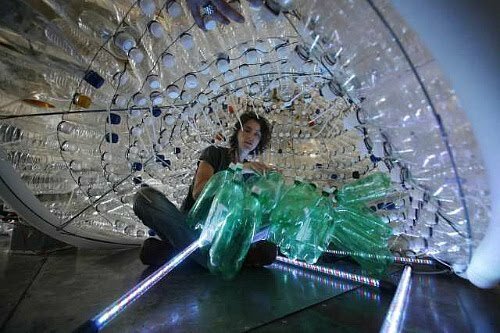 In Glow 2010, for specifically one-night event 20 original artworks will be performed. Artists like Anne Bray (Los Angeles), Céleste Boursier-Mougenot (Séte, France), Rafael Lozano-Hemmer (Montreal, Canada), Yoshua Okón (Mexico City) and Steve Roden (Los Angeles) will participate in Santa Monica Glow 2010 festival. An additional fifteen artists were selected besides five internationally known artists, through an open-call to artists in Los Angeles County. The Glow Network, an affiliation with organizations in Los Angeles are included in an important component of Glow’s programming that are engaged in unusual and/or locally-based arts and culture activities. This year Glow is partnering with 18th Street Art Center, Freewaves, LAND and Machine Project to jointly curate and commission projects.

Glow is a free all-night art event which returns for its 2nd year. This event comes with the wide range of light installations, art displays and exhibits that stretch throughout the city. This dusk-to-dawn cultural event captures the essence of the beach landscape with interactive, temporary art installations. In the year 2008, this festival was started and modeled on a trend in art projects that took hold throughout Europe. It was started in Paris with an art festival titled ‘Nuit Blanche’, which was slang for “all-nighter” in French.

“We’re really known for cutting-edge art and artists, and we have this unique natural setting which is the beach, so all of that came together to do Glow,” said Jessica Cusick, cultural affairs manager for the City of Santa Monica. “And interestingly enough, we’re still the only event in the United States of this kind which commissions all original artwork.” the spans of Santa Monica beach, pier and Palisades Park will be permeated by the Twenty commissioned installations. Cusick said, “The artist selection process is quite elaborate”. “We do a three-tiered selection process: through a curatorial committee, an open call, and through something we call the Glow network, which are partnered arts organizations.” 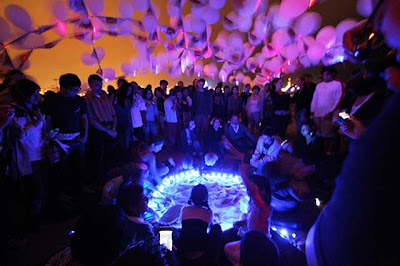 Two UCLA alumni, Joshua Howell and Aaron Zeligs, who have created a project titled “Soft Underbelly” in the Palisades Park area, will also be featured in this event. “I think the whole philosophy behind the Glow festival was really interesting to us – this kind of whole entire night of art,” Zeligs said. With a little less practicality, Glow’s art installations are a far cry from those seen in a gallery setting. Glow’s art installations are strong focus on sensations and exploration. Zelig said, “There’s something very interesting about doing installations that are actually susceptible to the environmental conditions and are not just in a pure gallery setting where they will remain untouched”.

The piece which is created by the pair for the festival is made up of black lights, helium balloons and the element of photoluminescence. All that, enwrapped into a floating canopy that suspends from a cluster of palm trees. The inspiration for the piece came from the ocean waters that Santa Monica borders, and, more specifically, the weightlessness and pulsating movement of jellyfish throughout these ocean waters, according to Zeligs. “I think the challenge for us is that we’re going to create this art piece, and it’s going to have a delicacy to it that’s intentional, but it also has to put up with potentially 200,000 people who are going to see it in a span of a few hours,” Howell said. “But that’s the excitement about doing a public piece.”

Although, it is an acoustic music performance or a digitally based piece of art complete but most of the installations will be different at the festival with some component that will make it glow in the dark and light the festival. All will depend on those attending to engage with the pieces. “One of the really amazing things about Glow is that it’s an opportunity to rethink the city and see it through the eyes and minds of artists in a new way,” Cusick said. “You can roam around on the beach or under the pier and through Palisades Park while having these amazing art experiences that are mediated by these exciting artists.”