About 20,000 employees in Air India plan to stay off work for the 2nd day today. The employees are protesting the “monopoly of the top management“.

Upto 40 flights were cancelled after the strike began yesterday and matters could worsen for fliers today. It is unclear that how long the strike will continue.

The Air India flight in which Chief Minister M. Karunanidhi arrived here from Coimbatore was delayed by more than two hours. 20,000 Air India employees at the airport told reporters that they had been told by their colleagues in New Delhi about the decision by union leaders to resort to the flash strike that began around noon.

Passengers bound for Singapore and other destinations said they waited for hours after collecting boarding passes and there was no information on why the flights were delayed. 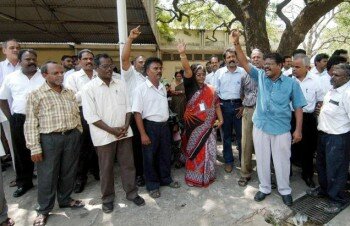 The national carrier has warned general secretaries of two employee unions that speaking to the media may lead to their expulsion.

“It’s not our fault. If there’s something wrong and the company is not doing well, we will definitely bring the matter to the media’s notice so that it reaches the government and the people,” said Shetty. “Putting a gag order is akin to autocracy, which we will oppose.”

Blaming Union Minister for Civil Aviation Praful Patel, and Air India’s Chairman and Managing Director Arvind Jadhav for concealing the truth, Shetty said, “We are against the carrier’s anti-employee policy. We have already put forth our demands and they should consider these and apologise to us.”

“Yesterday, as the association learnt about the show-cause notice, many ground engineers abandoned work. To get even, Air India sought help from a private airline’s ground engineers in Mangalore,” said an Air India employee, on condition of anonymity.

“Subsequently, it became a prestige issue for the union and they decided to go on strike.”

Shailendra Singh, president of the Indian Commercial Pilots’ Association, said that they were not supporting the strike right now.

“We are scheduled to meet the labour commissioner over a list of compensation-related dema-nds on June 9. Depending on what transpires at the meeting, we will decide our next course of action.”