California is calling the outbreak an epidemic, after 910 cases of whooping cough that have left five babies dead. New warnings are out to fight California’s current epidemic of whooping cough. 75 cases have been reported in Kern County and due to the outbreak, parents are now recommended to start getting babies vaccinated sooner, and adults should also get booster shoots of vaccine. 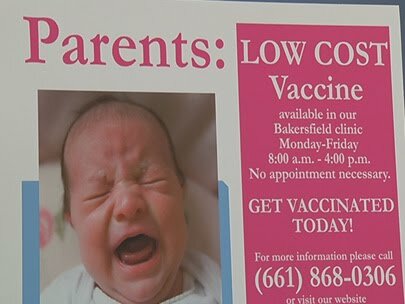 In California, total 910 cases of whooping cough are reported that could mean the worst epidemic in the Golden State in 50 years. Also, state official announced five babies have died from whooping cough in California. Parents should start babies on the whooping cough immunizations when they are six weeks old, instead of at eight weeks according to health officials. Very young children are the most at risk and for tiny babies the symptoms of severe coughing can be deadly.

Kern County, Public Health assistant disease control director Denise Smith said, “We need to get the word out to the public about the seriousness of this disease, and the potential that little children can actually die if they are not protected from pertussis”. Health officials issued some new guidelines on 24th June, Thursday.

Dr. Jonah said, “It is important to actually vaccinate and protect those persons who are over seven years of age because they are the ones who are going to create the exposure for the very young people that aren’t going to be fully vaccinated.”

Health experts suggest that the very young children require the series of four pertussis shots, and then another booster before starting Kindergarten. Booster shots are suggested again by about age 11 according to doctors, because the protection can wear off by then.

Whooping cough is highly contagious disease and so it can be spread from person to person. Runny nose and cough are primary symptoms of whooping cough. However, it can lead to vomiting or even broken ribs for adults or teens in very severe condition. The whooping cough epidemic is hitting the hardest in the Bay Area and Central Valley according to the state.

In Kern County, 26 cases of whooping cough have been reported in babies under the age of six months and 20 cases of patients over twenty. So far, the total reported in Kern County this year is 75.

Low-cost Tdap booster shots will be provided by the Public Health Department at the clinic on Mt. Vernon Avenue, Monday through Thursday from 8:00 a.m. till 4:00 p.m. For this, no appointment is needed and you can also call 868-0306 to get more information.

Vaccine for whooping cough will also obtainable for free at future H1N1 flu clinics, which are set to be held on Saturday, 26th June, at the Food Permit Fair, at 2700 M Street from 8:00 a.m. till noon, and at the Catholic Charities Food Giveaway at 250 East Bear Mountain Blvd. in Arvin from 10:00 a.m. till 2:00 p.m.

Shots will be available at the Arvin Migrant Center on Sunset Blvd from 4:00 p.m. till 7:00 p.m. on Friday, 9th July and on Saturday 10th July; families can get vaccinations at the Ranch Market on South “H” Street in Bakersfield from 8:00 a.m. till noon.

The shots will also be obtainable on 17th July, Sunday from 8:00 a.m. till noon at both Ranch Market locations in Arvin and Delano. According to health experts, the extra precautions against whooping cough are very important.

Dr. Jonah said, “Because of the greater numbers we’re experiencing now, it’s important for people to know and understand there are ways they can protect themselves. And that they can protect others from infection.”