Those who consume moderate amounts of alcohol are more likely to be less stressed, healthy, slimmer and have less risk of developing heart disease, according to study of French research.

They also said that Moderate drinkers also tend to more exercise and have a higher social status, further boosting their general health compared with those who abstain or drink heavily.

‘Importantly, the findings showed moderate alcohol consumption is a powerful general indicator of optimal social status and this could be a key reason for improved health in these subjects,’ said Dr Boris Hansel, of Public Assistance Hospitals of Paris, which led the study. 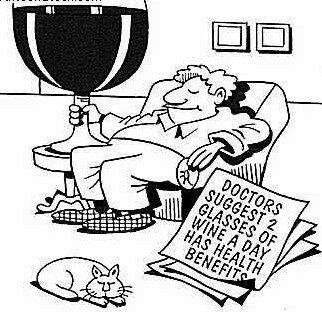 He and his team studied about 150,000 French people – 97,400 men and 52,300 women – who were split into five groups: teetotallers; those who drank less than a glass a day; between one and three glasses a day; heavy drinkers and former drinkers.

For both genders, alcohol intake was strongly linked to increased concentrations of ‘good cholesterol’ in the blood.

‘Consumption was strongly associated with several clinical, social and biological characteristics that favour a superior overall health status and a lower risk of cardiovascular disease in moderate alcohol drinkers, compared with never drinkers,’ the researchers said.

June Davison, of the British Heart Foundation, said the study added to earlier research which suggests a small amount of alcohol drunk regularly ‘can offer some protection against coronary heart disease’.